Jingdezhen was the production centre of export porcelain, but smaller kilns in southern China competed on Asian markets. A group of factories in the south of Fujian province was particularly active. Their products are referred to by the old name of 'Swatow', which is derived from the harbour from where these wares were allegedly shipped. However, recent archaeological research has proved that in fact they were produced in the Zhangzhou area in a variety of kilns. Thick-bodied porcelain or stoneware dishes, jars, jarlets and covered boxes were made here from around 1570. Bowls, bottles, vases and kendis are more rare.

The output was exported to Malaysia, Indonesia, the Philippines and Japan, but not to Europe, where this type was regarded as too heavy and coarse. The Portuguese – and later the VOC (Dutch East India Company, 1602–1799) – used Swatow as a commodity in their inter-Asian trade. The type is known in underglaze blue, in overglaze enamels and in combinations of the two. The decorations are largely derived from Jiajing and kraak porcelain made for export in Jingdezhen, but the quality of their painting is usually noticeably inferior. Landscapes with birds or deer, for instance, were sometimes drawn so quickly and sketchily that it is difficult to see what exactly is depicted. Dishes and jars often have much kiln grit adhering to their bases and their thick, milky glaze can be heavily crackled. Rather unusual are dishes with an underglaze monochrome brown or blue, decorated in white slib with dots and lines a technique only seen on Swatow wares. Also exclusive to Swatow are dishes decorated in green enamels with Arabic inscriptions that were made for the sultans in Aceh (northern Sumatra). The large jars were used to transport and stored dried fish, pickled vegetables, arak, oil, etc. Small jars contained cosmetic oils or magical fluids, while covered boxes held a paste, an ointment or whatever the owner wanted to keep in it. Swatow was highly regarded in Indonesia and for centuries pieces were cherished as family heirlooms (pusaka porcelain). Almost all Swatow in the Netherlands was collected in the former Dutch Indies and ended up here. The civil wars in China in the mid-17th century interrupted porcelain exports from Jingdezhen, but brought an end to Swatow production. 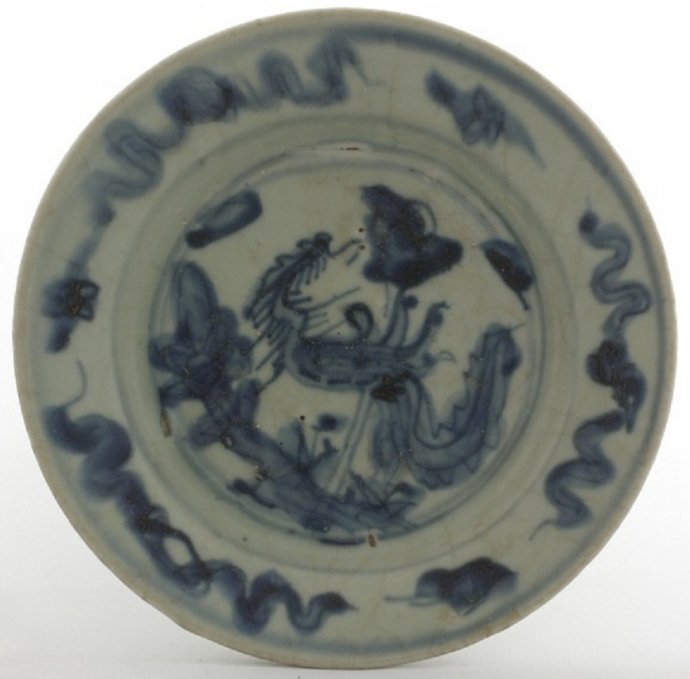 Dish on footring, flat rim. Crackled glaze. Decorated in underglaze blue with a phoenix, its head facing the moon with stylised emblems and clouds, encircled by a double concentric band. The sides undecorated. On the rim antiquities with scrolls. On the reverse flower sprays. On the reverse wall a rectangular paper label that reads: 'MING DYNASTY (1368-1644) Unearthed from ancient Chinese gravesites in Tigba-wan, ?liolo, Philippines, (during the 1970's)'. To the base a lozenge-shaped paper label reads: 'P100 is  xs64.6', most likely, the location of the dish on the gravesite. 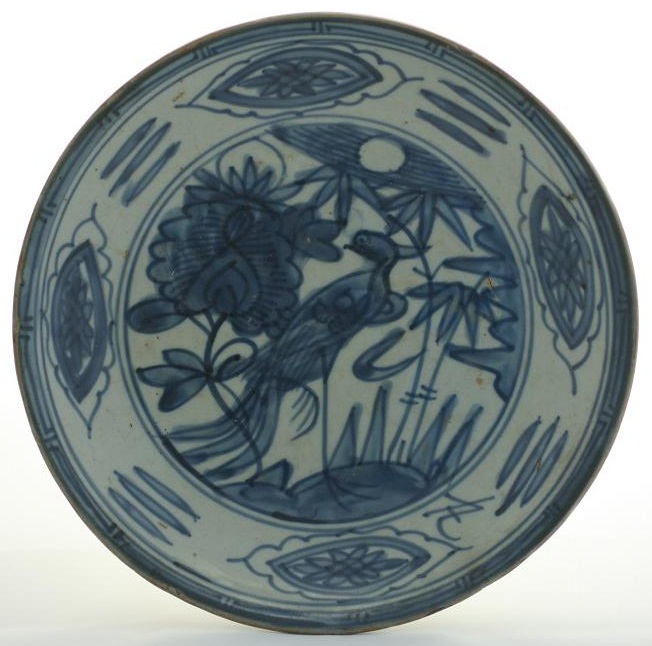 Dish on a footring, straight rim, partially glazed base. Decorated in underglaze blue with a standing phoenix, a peony to his left and bamboo on his right, encircled by a double, concentric band. On the sides four oval medallions in diamond shaped frames filled with rosettes and separated by tripartite horizontals, a parody of trigrams. On the rim a key-fret pattern border. The reverse is undecorated. On the base the number '7' has been painted in red.

Shards of such a dish was excavated from the Portuguese São Gonçalo shipwreck (1630) in Plettenberg Bay, South Africa. (Adhyatman 1999, p.78)

A similarly shaped and decorated dish was excavated from the wreck of the Dutch East India Company, (Vereenigde Oost-Indische Compagnie, VOC) vessel the Witte Leeuw (1613). Its properly excavated and documented cargo included many pieces of kraak porcelain in a wealth of varieties. (Pijl-Ketel 1982, pp. 83-100 & inv.no:11850) 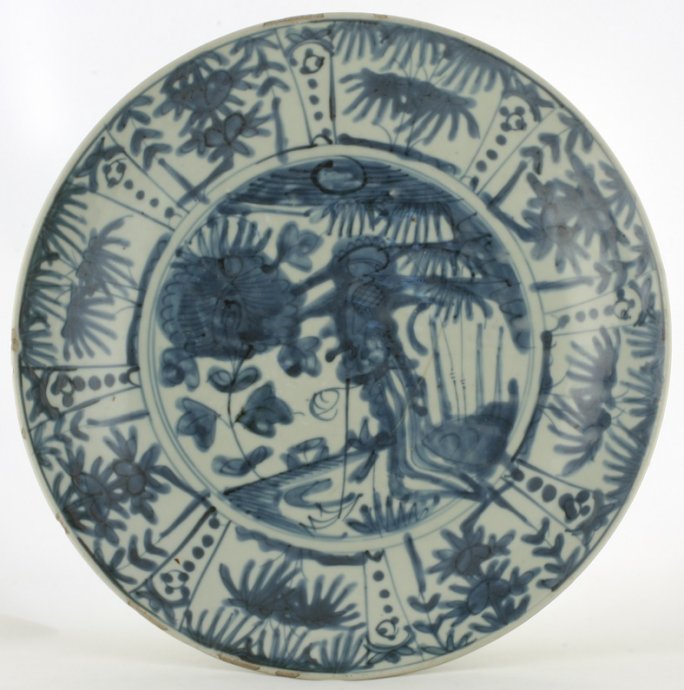 Large dish on footring, straight rim and an unglazed base. Decorated in underglaze blue with a Phoenix standing in a garden. The bird stands in profile on one leg. The other is lifted, in the characteristic resting pose of waders. A peony tree is on the left. The bird's cock's-combed head is turned towards bamboo on his right. Three long tail feathers stream towards the edge of the design. Areas around the bird's neck and breast are filled with, parallel strokes. Detail of peony and leaves are accentuated by similar lines. Bamboo is stylized at three levels: elongated triangles close to the ground for the shoots; long, pencilled rods at medium level for the stems; zig-zag fringes close the top of the design for the leaves. Rocks and pool are outlined close to the bottom of the design. The border is divided into sixteen segments. Narrow fields with patterns of dots alternate with broader fields enclosing floral motifs. Some kiln-grit adhering to the footring and base. On the base a rectangular paper label that reads 'Phoenix standing in a Garden. Swatow 1600.'

The standing Phoenix and His Environment that since he is a chimerical creature, the phoenix may adopt the 'image' of natural birds and also "influence" them to stimulate him, provided only stunning beauty is the result. This unique creature is composed of admirable parts of various animals. The phoenix has the head of a pheasant, surmounted by a cock's comb, the beak of a swallow, the neck of a tortoise. He subsides on the seeds of bamboo and on sacred springs. He is virtue and benevolence, strides rather than walks. He is over six feet tall. Flying, he fills the air with music. On Swatow types, the phoenix is represented in two ways: standing or flying. But whereas both motifs are common decorations on polychrome Swatow types, only the standing phoenix is common in blue-white. The phoenix stands always large, in profile, on long legs. Bamboo, his traditional food, and peony, his traditional tribute, surround him. But the detail of his head, his plumage and his environment vary. Painting is outline and wash, frequently in contrasting shades of blue. (Harrisson 1979, pp.63-68)

Condition: A hairline, most likely caused by the firing process, to the base. Seven glaze rough spots to the rim. A chip to the rim and inner footring. 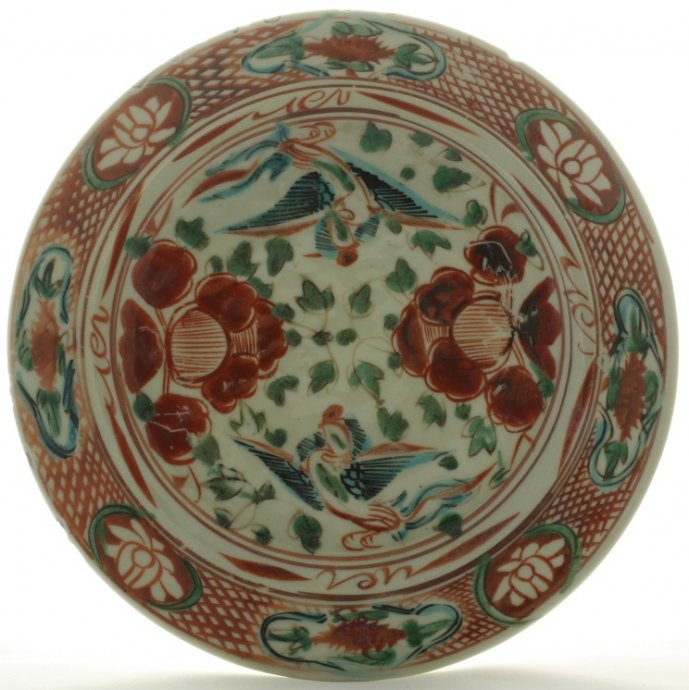 Dish on footring, flat rim. Polychrome decorated with overglaze iron-red and green and turquoise overglaze enamels with two phoenixes is flight, lotus and peonies plants, pendant jewels and roundels representing peaches. The background is completely filled with leafy scrolls. On the sides four foliated and four round medallions filled with flowering lotus plants on a crossed lines ground. The reverse is undecorated.

Swatow ware was mainly exported to Japan and Southeast Asian countries such as Indonesia, the Philippines, Malaysia, and Brunei. It was the main Chinese export ware to Indonesia in the sixteenth to seventeenth centuries. Examples are found as treasured heirlooms and excavated in ancient historical sites and shipwrecks. In the past they were used extensively by the nobility and the elite in communal feasts heaped with food, as wedding gifts and as status symbols. Not many were used as funerary gifts as the Muslim religion forbade such practices. Fragments of polychrome and blue and white ware have been found in the Zhangzhou kilns in Fujian. This is evidence that polychrome wares were made in the same kilns and at the same time as blue and white wares. Polychrome ware is very popular in Indonesia and Japan. In Indonesia it is called Ming merah, or red Ming; in Japan it is named gosu akae, or red ware, and also Nanking enamelled ware. The polychrome ware has four colours. Red tends to be dominant and is used for the principal motifs and diapers. Black is used for outlines and green is the colour of leaves. Turquoise covers black outlines of animals, mythical beasts and humans or it is used on its own. The use of the turquoise colour could have been influenced by Muslin patronage. For the Middle East and Southeast Asian countries with a predominantly Islamic population, the turquoise is an auspicious stone.(Adhyatman 1999, p.14 & p.32)

Condition: Some firing flaws and glaze rough spots to the rim. Fine crazing the glaze of the exterior.