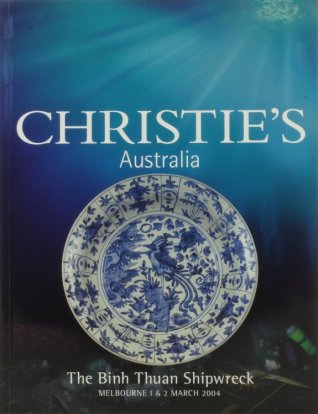 On 1 & 2 March 2004, a small Cargo of Ming Dynasty porcelain was auctioned by Christie's in Melbourne, Australia. The wreck was first discovered in early 2001 by local fishermen off the coast of Bin Thuan Province in Vietnam. The Vietnamese authorities soon got wind of the discovery and excavated the site in October 2002. Of the 34,000 pieces recovered, half were retained for the museums in Vietnam, and the remaining 17,000 pieces were auctioned in Melbourne, where bidding was very strong. Archaeological research confirmed that the Junk was infact Chinese, and was carrying a cargo of Wanli (1573-1620) "Swatow" porcelain from Zhangzhou in Southern China, together with a large quantity of iron pans. It is believed that the Junk may have sunk after hitting a nearby reef. VOC (Dutch East India Company) records state that a Junk belonging to Chinese merchant I Sin Ho had been lost in this area in 1608, on route to Johore on the Malay Peninsular. Although no conclusive evidence has been found, all the indications point to The Bin Thuan Shipwreck being the vessel of the unfortunate I Sin Ho. The Bin Thuan Shipwreck is the first dedicated shipment of Zhangzhou porcelain to be found. Made by hand in Fujian Province, The porcelain is often characterised by kiln grit adhering to the base, and the free and spontaneous decoration which means that each piece is literally unique. (courtesy: Rodger Bradbury Antiques)