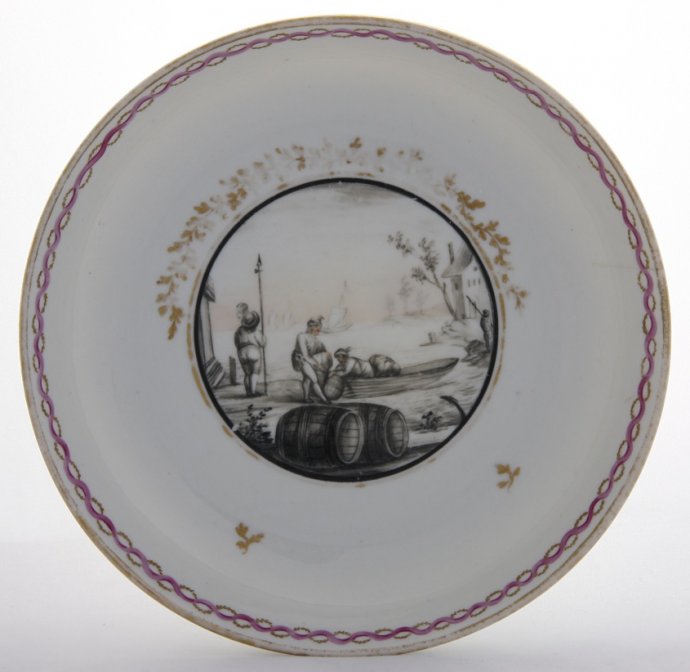 Saucer on footring, straight rim. Blank porcelain. Over-decorated in overglaze aubergine enamel, gold, black and a pinkish gold wash in Germany Hausmaler c.1750-1760 with a central roundel filled with a harbour scene with two barrels and a part of a ship's anchor, three men are loading barrels into a small boat. On the left a man standing guard, in the background three sailing boats, a house with trees and on a shore and a fourth figure fishing. Above the central roundel a floral wreath, on the sides two scattered flower sprays and round the rim an intertwined-pattern border. The reverse is undecorated.

Black or schwarzlot, decoration, was just being developed in Europe, the German Hausmaler was putting it primarily on undecorated Chinese objects, rather than on wares from the newly established Meissen factory.

The central scene is typical of Meissen painting of c.1735 with the three men loading barrels into a small boat. The very detailed and refined painting, so faithfully copying the original, illustrates the craftsmanship of the Chinese porcelain painter and the quality that could be reached in export porcelain. However, Chine de commande, like this must have cost a good deal more than the ordinary enamelled wares for export. (Jörg 1989/2, p.226)

For other in gold, black or schwarzlot decorated objects, please see: