Tableware and other Porcelain with Western Shapes

The knowledge and expertise required to make porcelain was already present in Japan as far back as the early 17th century. According to legend a Korean potter discovered clay suitable for making porcelain near Arita on the island of Kyushu in the south of Japan in around 1605. Porcelain made from this clay, called shoki-Imari, was intended for the foreign market and soon acquired a surprisingly characteristic Japanese style of decoration, first with a blue underglaze decoration and later in enamel colours. The experience of the manufacturers with enamel colours turned out to be of great importance later. (source: Groninger Museum, Groningen)

When Japanese potters started to make porcelain. It was inspired by underglaze blue porcelain manufactured in kilns of Southern China. By the mid-17th century, Chinese porcelain went into decline due to social unrest and accompanying dynastic change. Dutch merchants, from their base on the small island of Deshima, near Nagasaki, were permitted to trade with Japan. Responding to European demand, the Dutch encouraged the fledgling Japanese porcelain industry to fill the gap left by China.

The porcelain the Dutch brought to Europe in the 17th century was in most cases consciously designed to cater to western tastes. To ensure that they would find a ready market, the Dutch often made wooden or earthenware models of designs and sent those to Japan to be copied.

Flasks, ewers and large dishes are examples for shapes made for the Dutch. They are painted in underglaze blue or a palette of enamels dominated by red, green and blue with flowers, figures and landscapes which would not follow traditional Japanese aesthetics. Vessels with landscape designs are often inspired by 17th century Chinese Transitional style. Plates decorated with designs organized by panels imitate the successful blue-and-white Chinese Kraak ware. To make these export wares even more attractive for the Dutch clients numbers of early Japanese export wares are painted with a stylized tulip, referring to the tulipomania, the great Dutch craze of the 1630s. (source: Keramiek Museum Princessehof, Leeuwarden)

Striking are the blue dishes featuring the Dutch East India Company monogram on them. There is hardly any record of these specific pieces to be found in the Dutch East India Company achieves, but they were apparently often manufactured to order as the Company's 'official' tableware, which was used aboard the ships, in the trading posts all over Asia and even at the dinner table of the Governor-General of the Dutch East Indies in Batavia. Oddly enough it was never actually made in China itself, nor painted in enamel colours. Other motifs are family coats of arms, depictions of Dutch landscapes as well as of Dutch people and their ships. Also, quite striking are the bulbous flasks initialled with either their alcoholic or medicinal contents or with their owner's name. (Source: Groninger Museum) 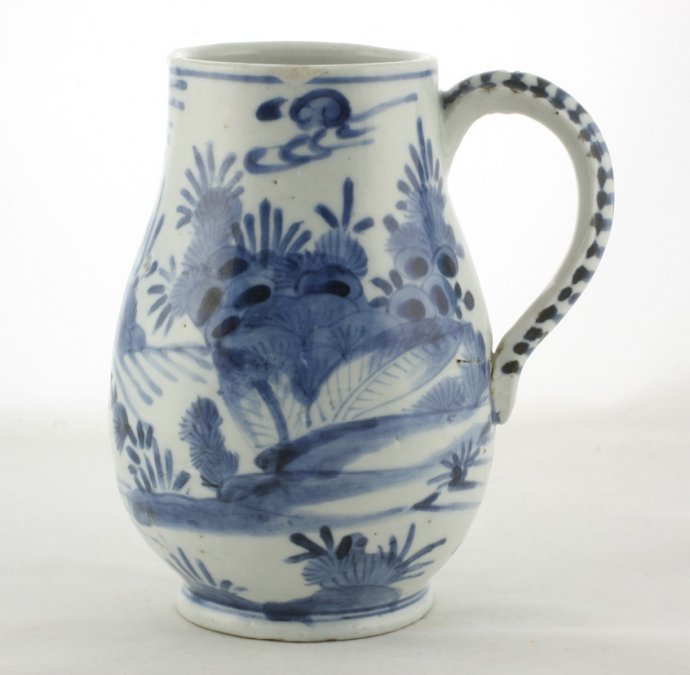 Exhibited: The World at Home: Asian porcelain and Delft pottery held from 17 June 2017 to 10 March 2019 at the Groninger Museum, The Netherlands.

The shape of this tankard / beer mug is derived from a European pewter or stoneware model and is common among Japanese export ware of this period. (Jörg 2003/1) 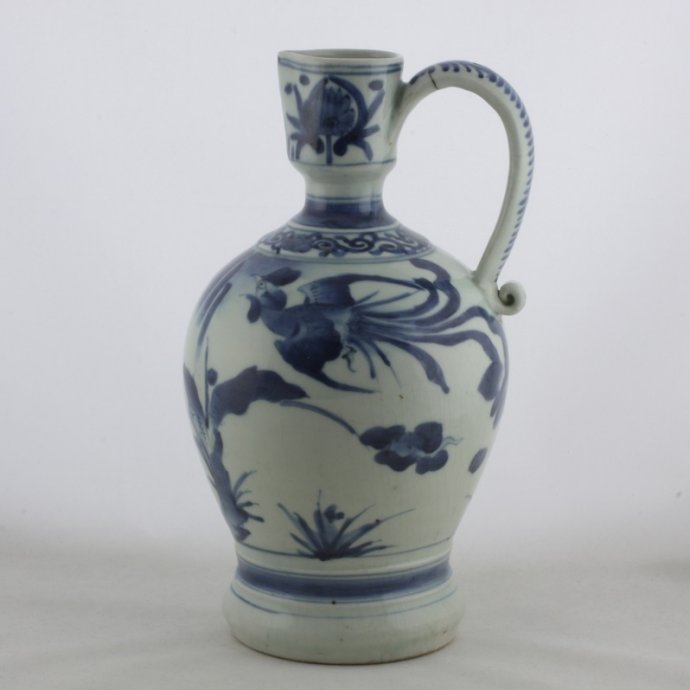 Large ewer of ovoid body on spreading takefushi or 'bamboo-noded' foot. Narrow waisted neck and large cup-shaped mouth with pinched spout. Curved pierced handle. Decorated in a, sketchily drawn, Chinese Transitional style in underglaze blue with peony and banana plants, a phoenix in flight and two birds perched on a rock. Formal broad blue bands round the foot and neck. Round the shoulder a floral scroll border and on the cup-shaped mouth two flowers who bear the well-known 'tulip' design. On the handle a floret between scrolls.

The Chinese Transitional style was virtually unknown in Japan until it was introduced by the Dutch. Japanese potters were not asked to imitate original Chinese porcelains by the Dutch; instead they were given wooden models which had probably been painted by Delft pottery decorators (though this is undocumented) or earthenware (presumably Delft). It is hardly surprising therefore, that the resultant Japanese essays in Transitional style are far from the original both in design and execution. Many shapes are Chinese, and some are Near Eastern, but others reflect Delft wares or at least Delft variations on a Chinese theme. Most Japanese Transitional style wares are in closed shapes, mugs, jugs, jars and ewers; most Kraak style pieces are in open shapes, plates and bowls. The piercing on the handles of this and similar shapes is original, and was intended for the silver or other metal mount that would customarily have been added in Europe. (Impey 2002, pp.42-49 & p.49) 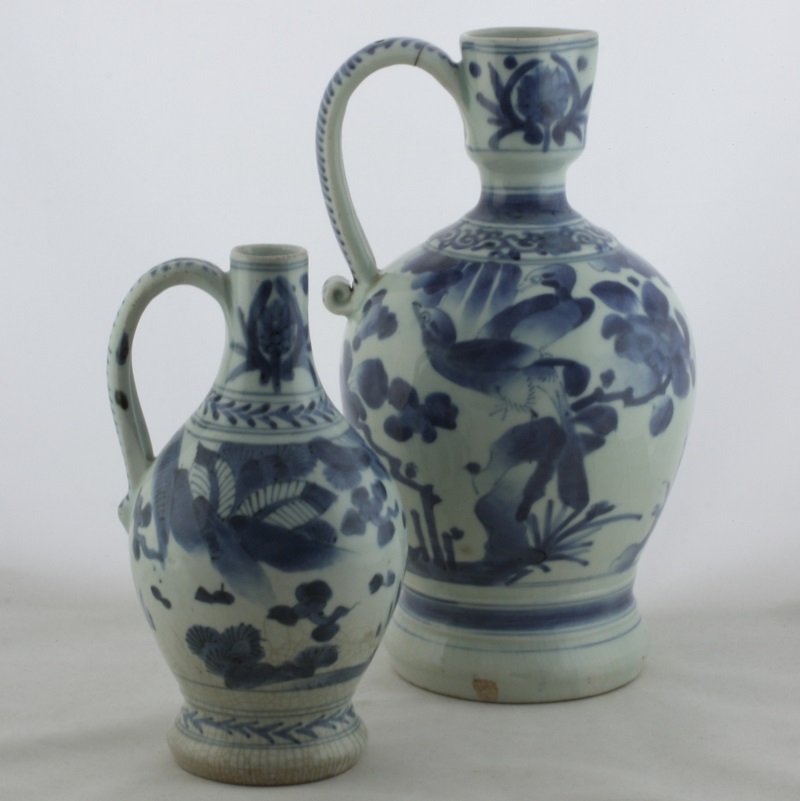 Object 2012071A is of an unusual large size, on the photograph above it stands together with object 2011142, another Japanese ewer of normal size.

For a similarly shaped and decorated ewer, please see:

Condition: Firing tension hairlines to the handle, caused by the firing process. 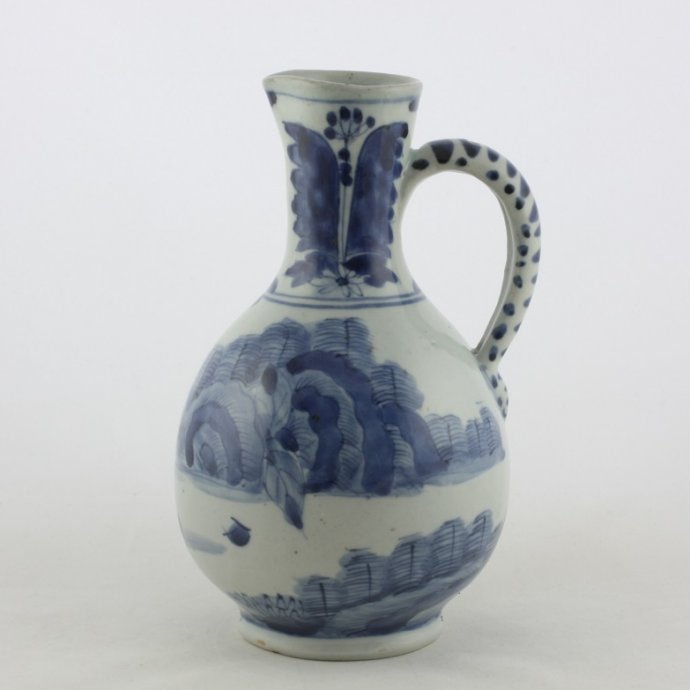 Ewer of ovoid body on spreading foot, cylindrical neck and a large mouth with a pinched spout. Curved pierced handle. The shallow conical base is glazed. Decorated in underglaze blue In Chinese Transitional style with figures in a mountainous landscape with pine trees. On the neck the well-known 'tulip' design, a stylised, symmetrical flower. On the handle dots and scrolls.

Impey classifies this ewer as a 'Category 5 Intermediate Transitional / Kraak' object. As Arita potters grew more confident with the new shapes and new styles of decoration demanded by the Dutch, so their own inventiveness must have taken over. Clearly, variations on the originally set patterns were not only allowed by the Dutch, but positively encouraged, as they perceived that the work of the Arita potters was of a high standard and that the decorative effects they produced were exotic and saleable. Thus pieces that mix any of the styles available to the potters appeared for instance in early enamelled ware and in blue-and-white. There is frequently a delightful mix of Transitional, Kraak and even Japanese styles harmoniously combined in one piece. (Impey 2002, p.52)

Condition: A firing flaw with a glaze imperfection surrounded by scratches to the glaze. A fleabite to the rim and to the pierced handle. 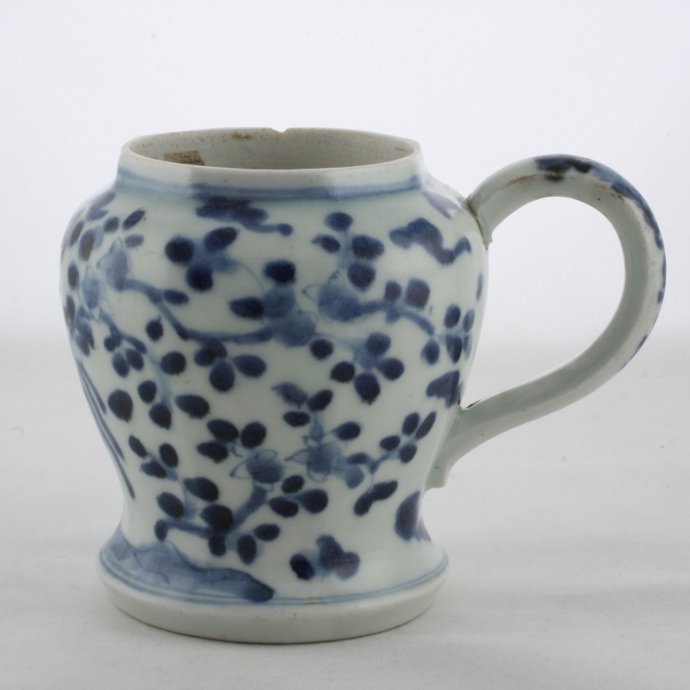 Mustard pot of baluster shape on a footring, curved handle, wide mouth. Rim unglazed inside for cover, now missing. Decorated in underglaze blue with a peacock perched on a branch of a blossoming cherry tree. On the handle a floret between scrolls.

Mustard was extremely popular in The Netherlands where it was used to improve the taste of food and was made locally. It was not well homogenised yet, and had to be stirred before use. Small (wooden) spoons came with the pots, which consequently have either a round opening in the cover or an opening in the mouthrim. The original cover must have had a central hole for a spoon as there is no opening in the rim. (Jörg 2003/1, pp.162-163)

Condition: A firing fault to the handle and a chip with a tiny short hairline to the rim. 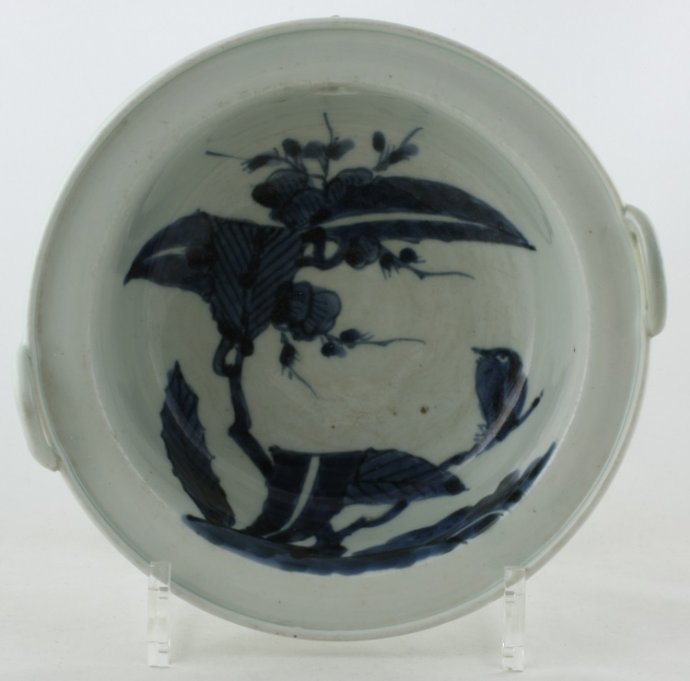 Milk bowl, the base with a firing-ring and some adhering kiln-grit, standing on three small conical feet. On the rim two arched handles, upturned edge. The side with a pinched spout at the top. Decorated in underglaze blue on the bottom with a bird perched on a branch of a fruiting tree. The reverse is undecorated.

The decoration in underglaze blue with the perched bird perched on a branch of a fruiting tree is interesting, it is very Japanese / Chinese and not at all export.

Such bowls, imitating a Dutch earthenware model, were used to pour the cream off the milk. They seem to be quite rare. (Jörg 2003/1, p.176) 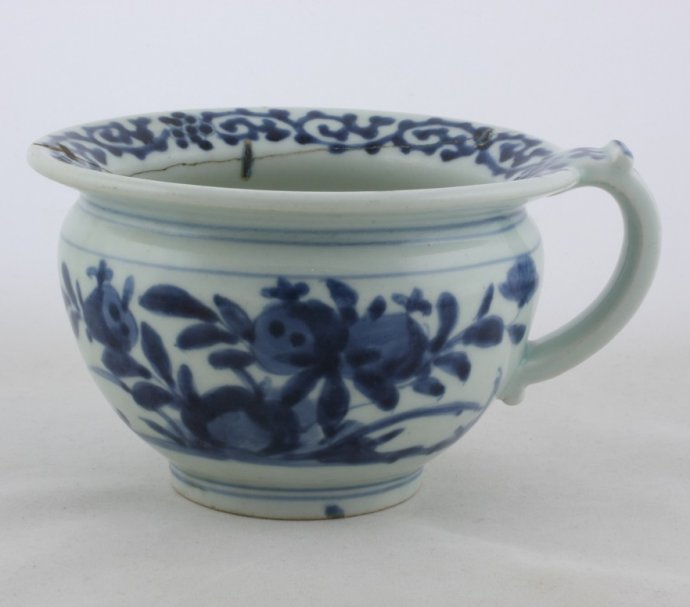 Small globular chamber-pot on footring with spreading upturned rim. C-shaped handle with thumb-rest. Decorated in underglaze blue with two groups of flowering plants growing from rockwork. On the inside rim and handle a karakusa scroll with single flower heads.

The size indicates that this is not a normal chamber-pot. It may have been used by children or as a ‘vomit-pot’ (Dutch: spuijgpotje). The glazed rim with the karakusa scroll decoration does not indicate that this chamber-pot once had a matching cover. 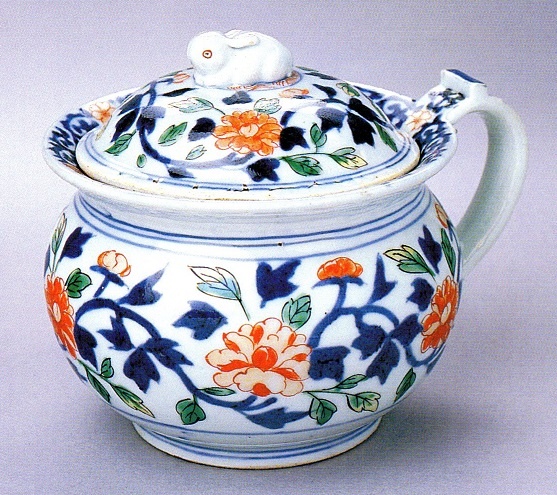 Condition: A re-stuck (clamped) piece to the rim. 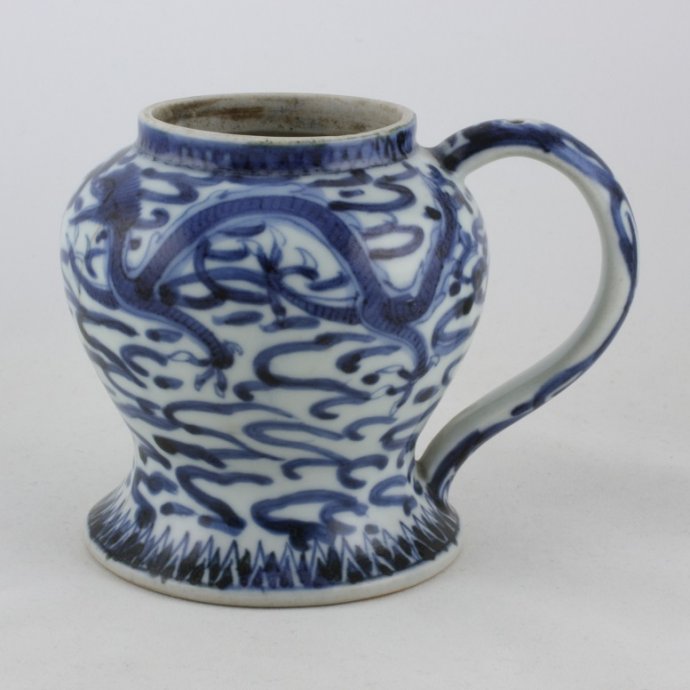 Mustard pot of baluster shape on spreading foot with a broad flat firing-ring. Wide mouth and unglazed base. Rim unglazed inside for cover, now missing. Curved pierced handle. Decorated in underglaze blue with two dragons chasing a flaming pearl in between scrolling clouds. Around the foot a border of pointed leaves. On the handle a floret between scrolls.

Mustard pots were among the first objects made for export and already figure in the shipping list of 1659.

Mustard was extremely popular in The Netherlands where it was used to improve the taste of food and was made locally. It was not well homogenised yet, and had to be stirred before use. Small (wooden) spoons came with the pots, which consequently have either a round opening in the cover or an opening in the mouthrim. The original cover must have had a central hole for a spoon as there is no opening in the rim. The shaped derived from a Dutch model. (Jörg 2003/1, p.162)

A similar example is in the Royal Danish Collection, Copenhagen, and was already documented in the inventory of 1690. It is decorated in underglaze blue with two dragons chasing a pearl between clouds. Although labelled as Chinese, it is more likely to be Japanese, as Chinese copies of this shape are not known.(Jörg 2003/1, p.162)

Condition: A Y-shaped hairline to the body originating from the base. 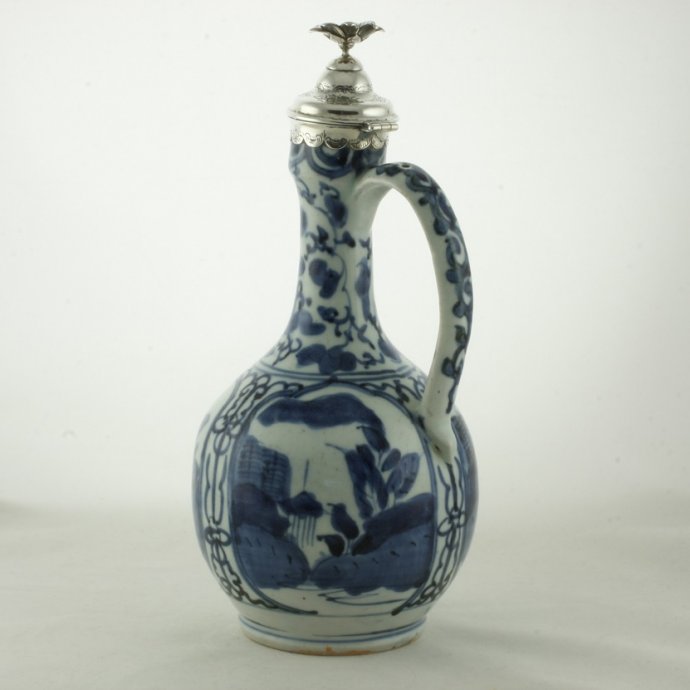 Oviform ewer on footring, cylindrical neck, cup-shaped mouth with pinched spout. Curved handle, pierced at the top for a mount. Fitted with Dutch silver mounts (marked). Decorated in underglaze blue with three shaped panels reserved on a ground of karakusa scrolls. In each panel a river scape with trees, mountains a pagoda and clouds. On the neck flower scrolls and a peony, round the mouth a ruyi-border. The handle with a karakusa scroll. The silver marks explained: the letters 'CH' or 'GH', are the (unidentified) makers mark, the sword mark was used (1814-1905) as the standard mark on articles too small for the full hallmarking.

The decoration is a simplified version, probably contemporary, of the decoration found on other ewers / jugs of the same period. The shape of this ewer / jug derived from a European stoneware model. The piercing on the handles of this and similar shapes is original, and was intended for the silver or other metal mount that would customarily have been added in Europe. (Impey 2002, p.54)

These tall long-necked jugs with landscapes in three panels separated by Mohammedan scrolls on their bodies, floral ornament on their neck and ju-i motifs, round their lips, are reminiscent of 16th- and 17th-century Ming Porcelain in decoration and probably date from 1674-1684. Some smaller jugs are similarly decorated with flowers, landscapes or figures in panels. (Lunsingh Scheurleer 1971, p.51)