This type of porcelain with decorations painted in iron-red, gold and some black enamel, is traditionally called melk en bloed, (which literarily translates as milk and blood). Interestingly, in The Netherlands in the 18th century the name was also applied to a specific type of imported Indian chintz, with predominantly red decorations on a light ground. The composition and iconography usely conform to the normal export assortment of blue-and-white Kangxi porcelain of c.1700. The dating of early 18th century is confirmed by the existence of some Red & Gold objects in the collection of August the Strong (1670-1733). Apparently, this type of porcelain was popular mainly among the Dutch and the very few pieces that can be found elsewhere in Europe usually come from The Netherlands. (Lunsingh Scheurleer 1989 & Jörg 2002/2) 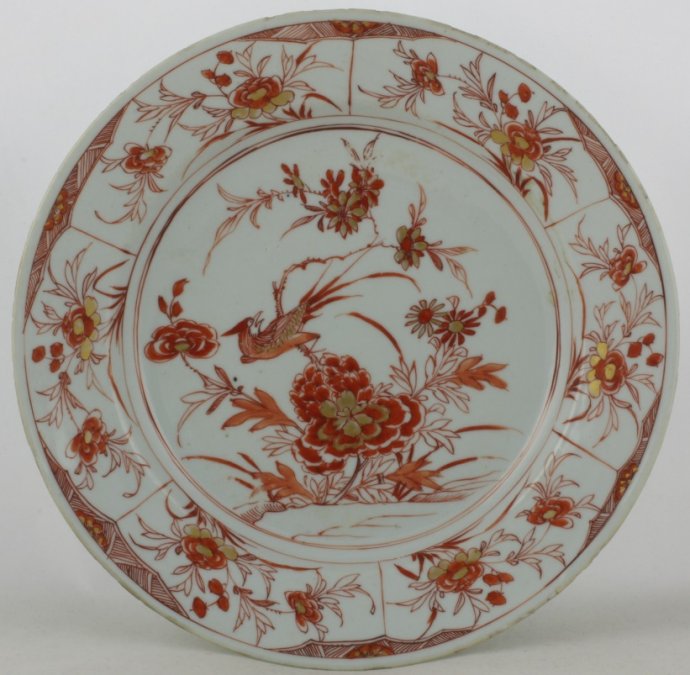 Dish on footring, flat rim. Decorated in 'Red & Gold' / 'Rouge-de-fer' with iron-red and gold on the glaze with a pheasant perched on the branch of a peony tree, surrounded by flowering peonies and aster. On the sides and rim six large panels filled with flowering lotus plants, separated by a thin line pouring out into small umbrella shaped panels, filled with a zig-zag lines pattern and a single half flower head. In the centre of the reserve a double circle in underglaze blue.

The pheasant (ye yi ;雉) is a very popular motif on Chinese export porcelain and frequently appears on enamelled and underglaze blue Kangxi wares. It also plays a rather prominent part in early Chinese literature. In Chinese bureaucratic hierarchy officials of the second grade had a gold pheasant embroidered on their court robes, those of the fifth grade a silver pheasant. The bird was represented as standing on a rock, looking towards the sun, the imperial symbol of authority. Pheasants are also strongly associated with women. During the Song Dynasty (960-1279) the robe the empress wore on grand state occasions was decorated with colourful pheasants contained within a red border decorated with dragons and clouds. It is not always easy to distinguish the pheasant from the phoenix as it often shares the attributes and meanings. Here, the pheasant is depicted as a general symbol of beauty and good fortune.

For another identically shaped dish with a similar central design, please see:

Condition: Various glaze rough spots and some fleabites to the rim