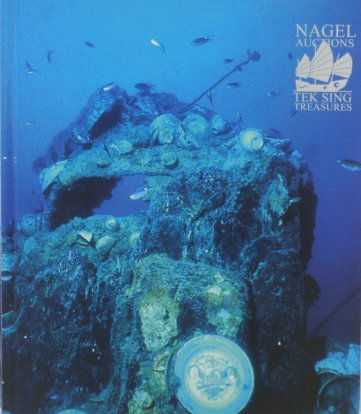 In this auction catalogue the salvaged cargo of the Tek Sing.

The Tek Sing (Chinese, "True Star") was a large three-masted Chinese ocean-going junk which sank on February 6, 1822 in an area of the South China Sea known as the Belvidere Shoals. The vessel was 50 meters in length, 10 meters wide and weighed about a thousand tons. Its tallest mast was estimated to be 90 feet in height. The ship was manned by a crew of 200 and had approx. 1600 passengers. The great loss of life associated with the sinking has led to the Tek Sing being referred to in modern times as the " Titanic of the East".

Sailing from the port of Amoy, the Tek Sing was bound for Batavia, Dutch East Indies (now Jakarta, Indonesia)laden with a large cargo of porcelain goods and 1600 Chinese immigrants. After a month of sailing, the Tek Sing's captain, Io Tauko, decided to attempt a shortcut through the Gaspar Strait between the Bangka-Belitung Islands, and ran aground on a reef. The junk sank in about 100 feet of water. The next morning, February 7, an English East Indiaman captained by James Pearl sailing from Indonesia to Borneo passed through the Gaspar Strait. The ship encountered debris from the sunk Chinese vessel and an enormous number of survivors. The English ship managed to rescue about 190 of the survivors. Another 18 persons were saved by a wangkang, a small Chinese junk captained by Jalang Lima. This Chinese vessel may have been sailing in tandem with the Tek Sing, but had avoided the reefs.

On May 12, 1999, British marine salvor Michael Hatcher discovered the wreck of the Tek Sing in an area of the South China Sea north of Java, east of Sumatra and south of Singapore. His crew raised about 350,000 pieces of the ship's cargo in what is described as the largest sunken cache of Chinese porcelain ever recovered. Human remains were also found, but they were not disturbed as most of Hatcher's crew, being Indonesian and Chinese, believed that bad luck would befall any who disturbed the dead.