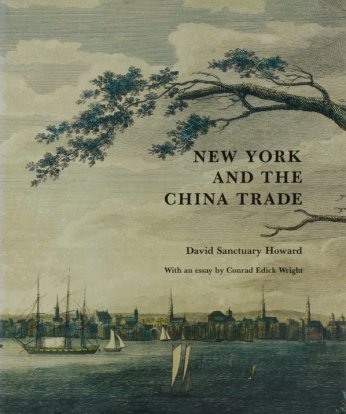 Author: Howard, D.S., with an essay by Conrad Edick Wright.

"New York and the China trade" commemorates the bicentennial of an adventure. When the "Empress of China" set sail for Canton on February 22, 1784, she began an exciting era in the history of New York. Never before had an American vessel ventured to China. Rumor and hearsay had been New York's primary sources of information about the Orient before the voyage of this 360-ton merchant ship. When she dropped anchor in New York harbour on May 11, 1785, nearly fifteen months after she had passed the lighthouse at Sandy Hook and set her course for China, the "Empress of China" announced important news: the establishment of relations both commercial and cultural between the world's youngest nation. its independence secured only a few years before, and perhaps the oldest.

Details: Illustrated soft cover with black and white and a few colour illustrations of all objects, Contents, Lenders to the Exhibition, Board of Trustees, Preface, Introduction, Catalogue of the Exhibition .

Private copy not for sale.