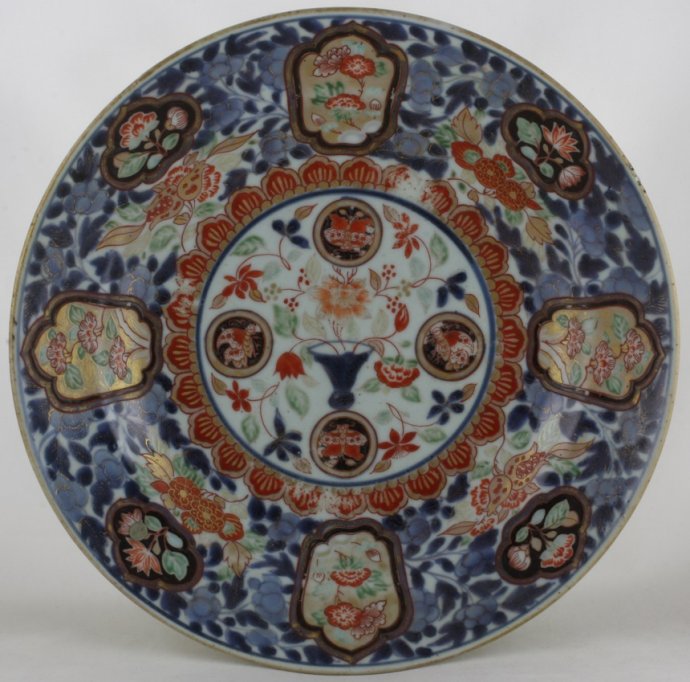 Dish on footring, spreading flat rim. On the base four spur-marks in a Y-pattern. Imari, decorated in underglaze blue, iron-red, green and gold. In the centre a roundel with a flower vase filled with flowering branches and four roundels filled with butterflies and bees and surrounded by a an upturned leaf shape-pattern. The sides with a ground of dense leafy scrolls in underglaze blue outlined in gold. Overlapping four large shaped panels alternating with four small shaped panels all filled with flower sprays. Groups of pomegranates alternate with groups of flowering chrysanthemum. On the reverse three wide spread chrysanthemum sprays. (Jörg 2003/1, pp.91-92)

The Imari style developed somewhere between 1670 and 1690, undoubtedly stimulated by the orders from the Dutch who liked the bright colours, the strong designs and the complex compositions. 'They got a of lot of decoration for their money', a collector once remarked and I think it was this, too, that appealed so much to buyers of Imari in The Netherlands and elsewhere in Europe. In fact, the Imari style conformed to the fashion for polychromy and gilt-work in Europe at the time. The 17th century was ' The Golden Age' for The Netherlands. It was a period of great economic and cultural expansion and its impact was felt well into the 18th century. The richly decorated Imari pieces fitted perfectly into the baroque interior and appealed to the taste of the rich bourgeoisie, enhancing their social status.

Condition: Some wear to the decoration and some popped bubbles of glaze, caused by the firing process, to the rim.

The absence of underglaze blue, may or may not follow kiln practice. Evidence from potsherds at kiln-sites does not suggest that some kilns made either the one or the other, rather that all kilns seem to have made both. On the other hand, there is a tendency in most examples for those pieces without underglaze blue to be more finely decorated and to bear more refined enamels; this may mean that they were emulating the Kakiemon, and therefore it seems more likely that this would have been the practice of some kilns and not others. (Impey 2002, p.191)

The Chinese marks only showing the dynasty (Ming) but not the name of the reign (e.g. Wanli) is not often seen (normally the Emperor’s reign is more significant). However they were found among the provincial wares for during few eras, such as Zhengde, Wanli, Tianqi, and Chongzhen. I think it is possible that they meant to avoid offending the government by not quoting the name of Emperor on commercial ware. (I am indebted to Mr. S. Fan for this information) 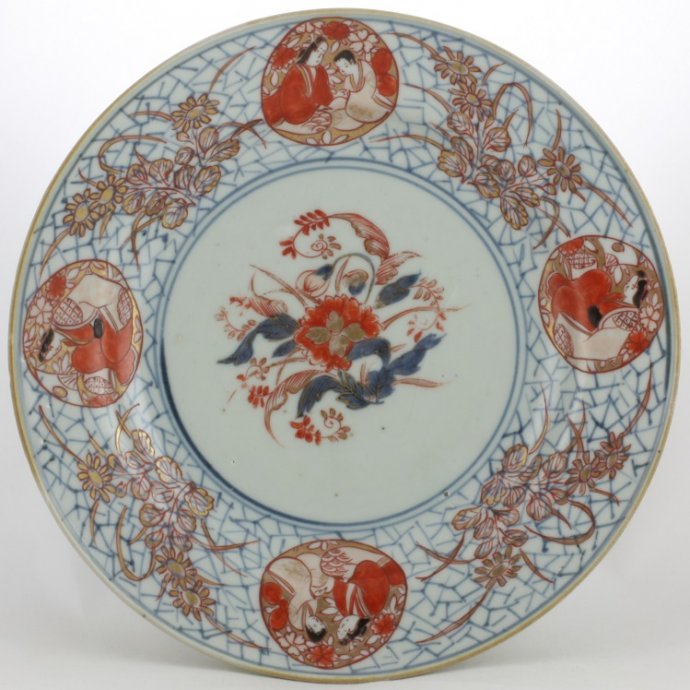 Dish on footring, flat rim with upturned edge. On the base three spur-marks in a Y-pattern. Imari, decorated in underglaze blue, iron-red and gold with a central floral spray. On the sides and rim a ground of 'crackled ice', four groups of chrysanthemums and grasses painted in red and gold over the blue ground and four reserved roundels with either a Japanese lady holding a fan or with a mother and child. On the reverse three flower sprays. Marked on the base with a square fuku (good luck) mark in running script. (Jörg 2003/1, p.112, cat. 117)

The 'crackled ice' ground already occurred on Chinese Transitional porcelain, but was particularly popular on Kangxi blue-and-white pieces. It was borrowed by Japanese porcelain painters in order to compete on the export market. The figures in the roundels are unusual. There is an identical bowl in the Dresden collection proving its early 18th-century date. Another is in the Hofsilber- und Tafelkammer in Vienna. (Jörg 2003/1, p.112, cat. 117)

The square fuku mark in running script on the base is common on blue-and-white Arita and Kakiemon ware. (Arts 1983, p.161)

For an identically decorated dish, bowl and cover, please see:

For an identically decorated bowl and cover, please see:

Condition: A frit to the rim and a hairline to the centre. 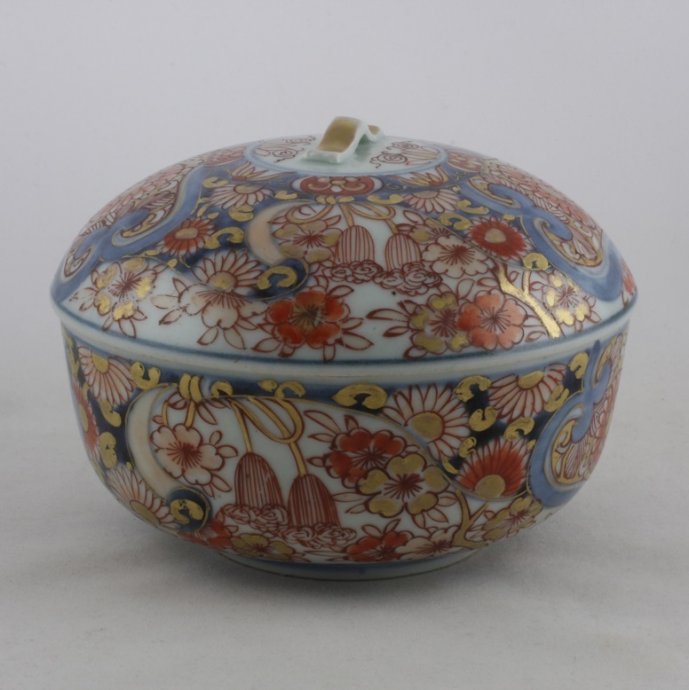 Covered bowl on footring. Straight sides, domed cover with strap handle. Imari, decorated with in underglaze blue, iron-red and gold. On the box flowering plants, ribbons and tassels alternating with a large shaped panel on a blue ground filled with a chrysanthemum flower head. Round the footring a narrow border with floral designs on a blue ground. On the base a single concentric band in underglaze blue. The cover is decorated en suite. The strap handle is decorated in gold. On the base a rectangular paper label that reads: 'M'.

The shape, most likely, derived from an European (silver) model, it was used as a small tureen. Jörg describes a bowl with cover on three low feet with a matching saucer this may indicate that originally the covered box also might have had an matching saucer. (Jörg 2003/1, p.110, cat. 113) 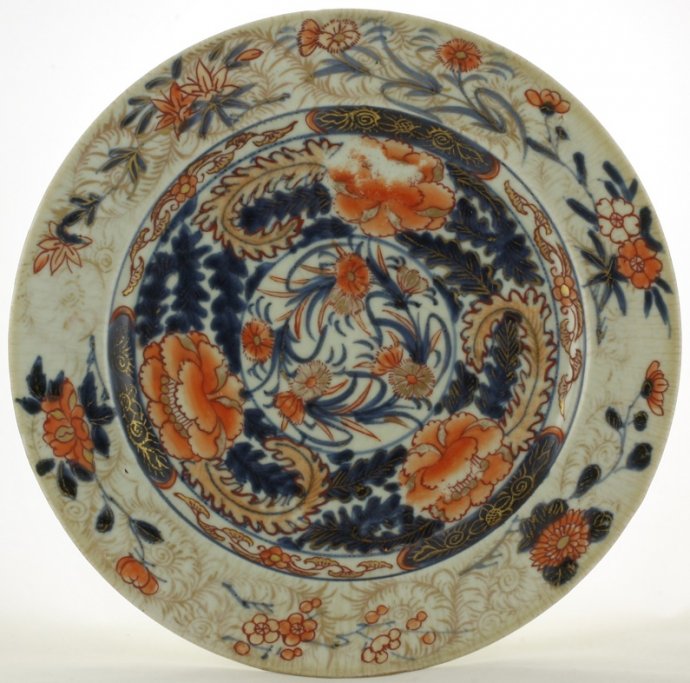 Dish on footring, flat rim. On the base four spur-marks in a Y-pattern. Imari, decorated in underglaze blue, iron-red and gold with flowering Fringed pink (nadeshiko) plants in a central roundel, surrounded by three flowering camellia (tsubaki) plants and serrated leaves in underglaze blue, gold and pink-wash. On the cavetto three underglaze blue cartouches filled with a florets between scrolls in gold alternating with iron-red and gold florets between scrolls. On the rim the following six groups of flowering plants;

Between all flowers dense leafy scrolls in gold. On the reverse three sprays flowering prunus. Round the footring three concentric bands. On the base a single concentric band.

The abundance of different types of flowers on this one dish is very striking and rarely seen.

Condition: Perfect, wear to the iron-red and golden decoration. The glaze heavily crackled. 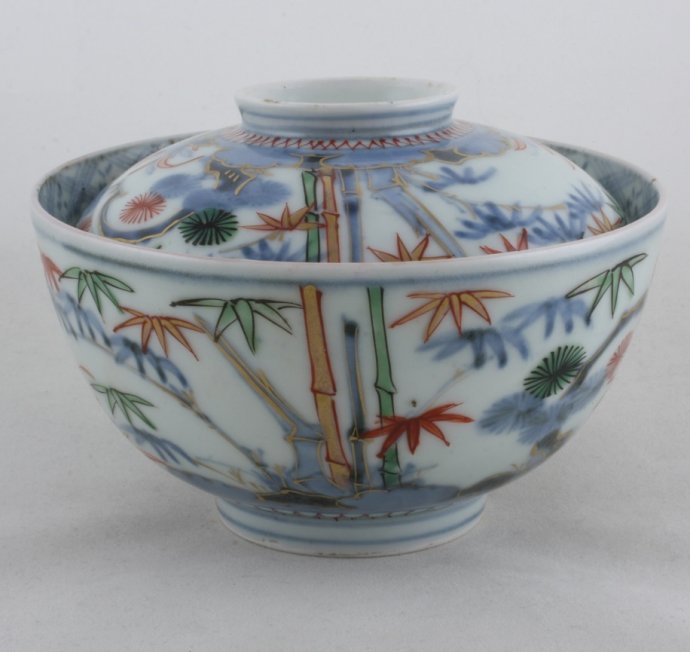 Bowl on footring, narrow spreading rim, domed cover with ring knob. Imari, decorated in underglaze blue, iron-red, green and black enamel and gold with groups of flowering bamboo, pine and prunus. Near the footring a pointed lotus leaves pattern border. Inside the bowl and cover flowering bamboo plants and a blossoming prunus spray, round the rims zig zag lines pattern borders. On the outside of the cover flowering bamboo, pine and prunus plants and round the outside of the ring knob a lotus leaves pattern border. Marked on the base of the bowl and in the centre of the covers ring knob with a fuku ['luck'] mark within a double-lined square in seal script.

The lavish decoration on the inside of the cover is unusual and rarely found on Japanese export porcelain. The decorative pattern of the, rather coarse, blossoming prunus branches is characteristic for the later second half of the 18th century.