In this category objects are added that have been submerged in seawater for a long time and were most likely part of (an unidentified) shipwreck's cargo. 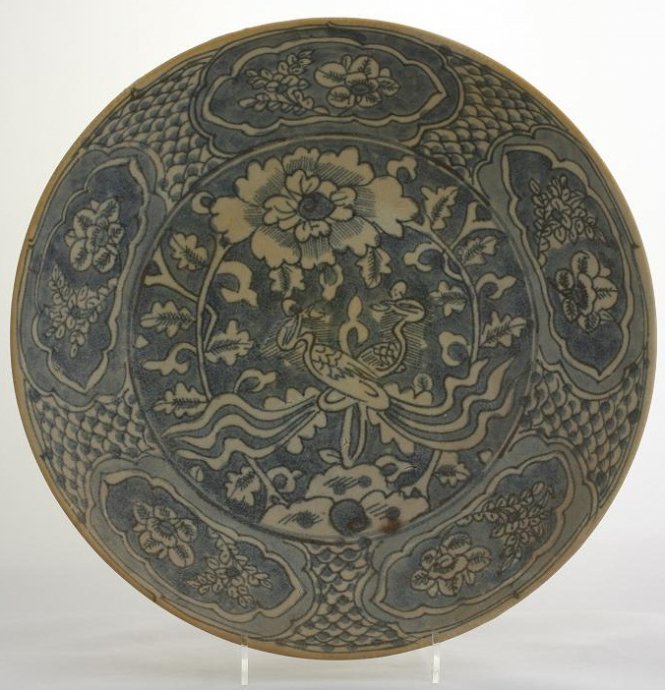 Dish on footring, straight rim. Decorated in reverse underglaze blue with two standing phoenixes facing and overlapping one another flanked by peony. The background is completely filled with leafy scrolls and leaves. On the rim five foliated medallions each filled with flowers, in between the medallions a concentric waves decoration. The reverse with three floral sprays.

This dish was, most likely, part of a shipwreck's cargo. It is unknown of which ship. All the glaze has worn of due to being submerged in sea water for centuries. Similar shaped and decorated dishes were found amongst the cargo of 'The Binh Thuan Shipwreck' a Chinese merchant vessel on its way from China to Johore that sank off southern Vietnam in 1608. Its recovered porcelain cargo was sold by Christie's Australia in 2004.

A identically shaped, sized and decorated dish was found amongst the ceramic load of the Dutch East India Company, (Vereenigde Oost-Indische Compagnie, VOC) cargo vessel Witte Leeuw shipwreck which had gone down near St. Helena, on its homeward voyage in 1613, to see this dish, please see:

Condition: Perfect but without glaze.