This is the traditional name used in the northern Netherlands for a particular group of export porcelain dating to the second half of the 18th century. It is characterised by the decoration that shows a dense and crowded design of Chinese men ('Mandarins'), women and children in a garden, on a terrace or in an interior, all dressed in colourful garments. Apart from rose, green, brown and black enamel, a purple-violet enamel is often used. Less widespread is a combination with underglaze blue. The decoration can be detailed and precise, but on later pieces is often coarse and stereotypical, and it is frequently combined with a brown-orange enamel. Fanciful rococo-style arabesques and asymmetrical panels can surround the main scene. Larger pieces sometimes have a decoration in relief. Objects of better quality often have small cartouches filled with birds on a branch, flowering plants or landscapes, sometimes done in encre de chine. Compared to the central scenes, it is clear that different craftsmen painted them. 'Mandarin' designs frequently appear on tea and coffee wares, on dinner sets and on display pieces like vases and garnitures. ‘Mandarin’ was much appreciated in the Dutch province of Groningen. A distinction was made between 'farmer's Mandarin' which is decorated without any gold, and the more precious 'gentleman’s Mandarin' which has an extra layer of gold. 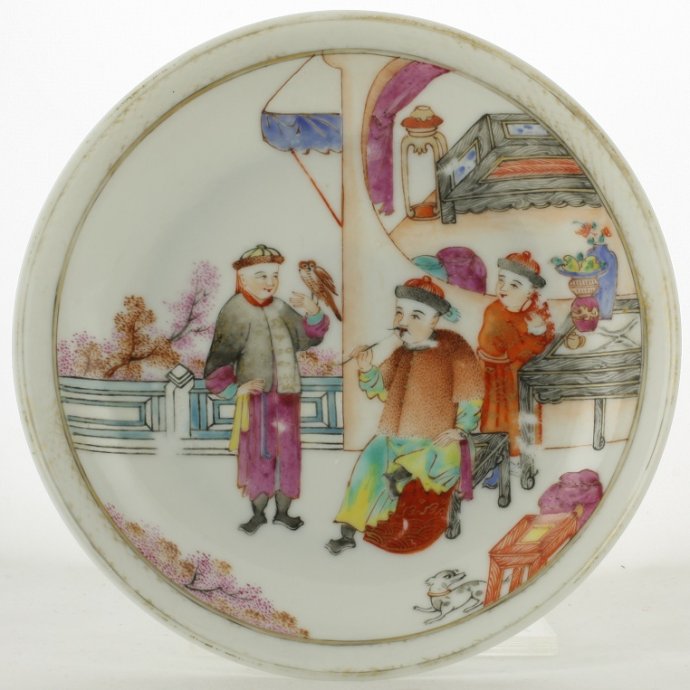 Saucer on footring, straight rim. Polychrome decorated in iron-red, black, gold and other overglaze enamels, with three figures outside a house on a fenced terrace with trees in the background. The first figure has a bird perched on his arm and is being watched by a second figure, standing at a table, and a third seated figure, smoking a pipe, a small dog rests beside a small table in the foreground. The reverse is undecorated. To the base a rectangular paper collectors label that reads: '24'.

The decoration is characteristic of the group called mandarijn (mandarin) in The Netherlands, a generic term used in the West to refer to all Chinese officials. purple, orange, yellow a hard pink and brown enamels were often added and decorations consisted mainly of Chinese figures and family scenes. In Groningen, herenmandarijn (gentlemen's mandarin), the variation with gold, as here, was regarded as suitable for the upper classes, while boerenmandarijn (farmers' mandarin), without gold was for the middle and lower classes. (Jörg 200/22, p.138)

Condition: Perfect with some wear to the enamels and gold. 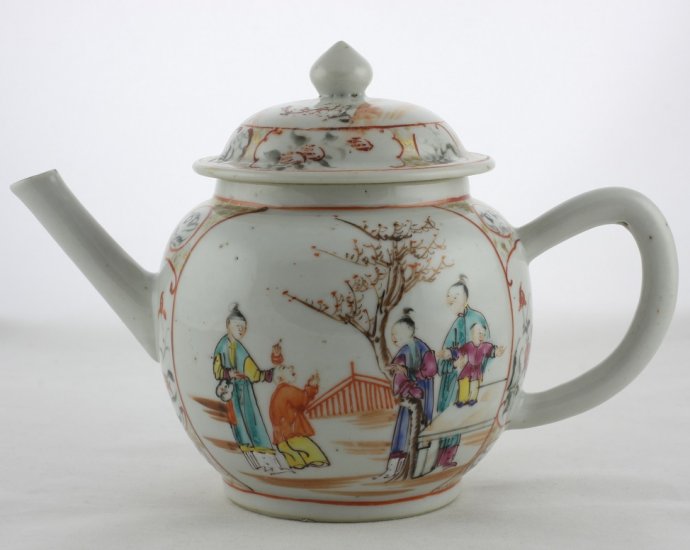 Teapot on footring, domed cover with a pointed knob. Curved C-shaped handle and a straight spout. Polychrome decorated in iron-red, black, gold and other overglaze enamels, On the body two large panels filled with a child standing on a table being watched by four figures in a garden with a tree and a fence. Around the spout and handle one large and four narrow panels filled with flowering plants. The cover is decorated en suite.

This type of decoration on Chinese porcelain is called 'Mandarin'. A Mandarin is a Chinese official, either civil or military, but the word itself is not Chinese, it comes from the Portuguese word mandar meaning 'to command'. Mandarin porcelain was produced in China for export in the late 18th century. It is called Mandarin because of the groups of figures in Mandarin dress that appear in the decorative panels. (Britannica Online Encyclopaedia)

Condition: A fleabite to the tip of the spout and to the rim of the cover.