This is the traditional name used in the northern Netherlands for a particular group of export porcelain dating to the second half of the 18th century. It is characterized by the decoration that shows a dense and crowded design of Chinese men ('Mandarins'), women and children in a garden, on a terrace or in an interior, all dressed in colorful garments. Apart from rose, green, brown and black enamel, a purple-violet enamel is often used. Less widespread is a combination with underglaze blue. The decoration can be detailed and precise, but on later pieces is often coarse and stereotypical, and it is frequently combined with a brown-orange enamel. Fanciful rococo-style arabesques and asymmetrical panels can surround the main scene. Larger pieces sometimes have a decoration in relief. Objects of better quality often have small cartouches filled with birds on a branch, flowering plants or landscapes, sometimes done in encre de Chine. Compared to the central scenes, it is clear that different craftsmen painted them. 'Mandarin' designs frequently appear on tea and coffee wares, on dinner sets and on display pieces like vases and garnitures. ‘Mandarin’ was much appreciated in the Dutch province of Groningen. A distinction was made between 'farmer's Mandarin' which is decorated without any gold, and the more precious 'gentleman’s Mandarin' which has an extra layer of gold. 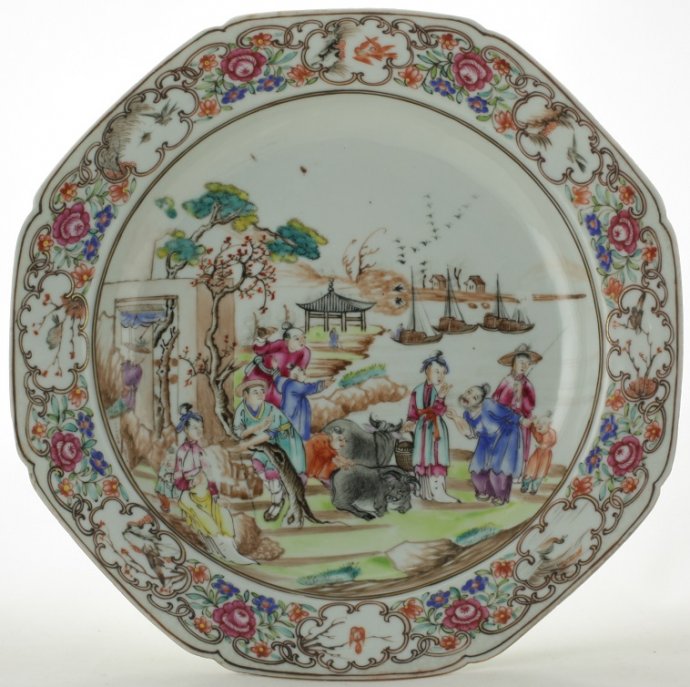 In the foreground a man stepping outside to observe a lady, wearing a light blue over piece (without sleeves) this style is common for a servant/nanny or housekeeper. While holding a shopping basket she is negotiating or bargaining with a fisherman. The man's humble posture tells us his eagerness to make a deal. Behind the fisherman a child and a lady of a family holding a fishing line. In the centre a man (perhaps another buyer looking forward to a good meal) is holding his purse in the air, next to him his son. There is a farmer taking a rest against a tree with two resting oxen. His shank protectors of the lower legs are only for working or travelling people that ties up to the loose trousers protecting the legs from bushes and thorns, like his hat protects him from the sun. A child plays with one of the oxen. On the left a child is hiding behind a seated lady, clearly the lady of the house, indicated by her composed, graceful and elegant posture. Her hair tie is casual and not as elaborately decorated as is a wealthy family. In the background a shore scene with a figure near a pagoda and four fishing boats one with two figures. On the horizon two houses, trees, mountains and a flock of birds. Around the rim a dense floral pattern border with leafy flowering branches, flower heads and cartouches filled with birds in flight, birds perched on a branch or a swimming duck. The reverse is undecorated.

This is quite a an outstanding piece of export porcelain, rich in colour with many (fourteen) characters/figures. It stands out from most of the other ceramics which tend to glorify wealth and luck. This could be the instruction given by the merchant making the order. "I want to reflect the daily country life of the common people you'd find in a village". The skills and illustration are original, natural, free to express and typical of the Qing artists style, not being distorted (or spoiled) by attempting to imitate or follow other styles. It is more close to being a work of art than a commercial kitchen ware. (I am indebted to Mr. S. Fan for this information)

The decoration is characteristic of the group called "mandarijn" (mandrin) in The Netherlands, a generic term used in the West to refer to all Chinese officials. Purple, orange, yellow a hard pink and brown enamels were often added and decorations consisted mainly of Chinese figures and family scenes. In Groningen, "herenmandarijn" (gentlemen's mandrin), the variation with gold, as here, was regarded as suitable for the upper classes, while "boerenmandarijn" (farmers' mandarin), without gold was for the middle and lower classes. (Jörg 200/22, p.138)

A Mandarin is a Chinese official, either civil or military, but the word itself is not Chinese, it comes from the Portuguese word mandar meaning "to command". Mandarin porcelain was produced in China for export in the late 18th century. It is called Mandarin because of the groups of figures in Mandarin dress that appear in the decorative panels. (source: Britannica Online Encyclopaedia)