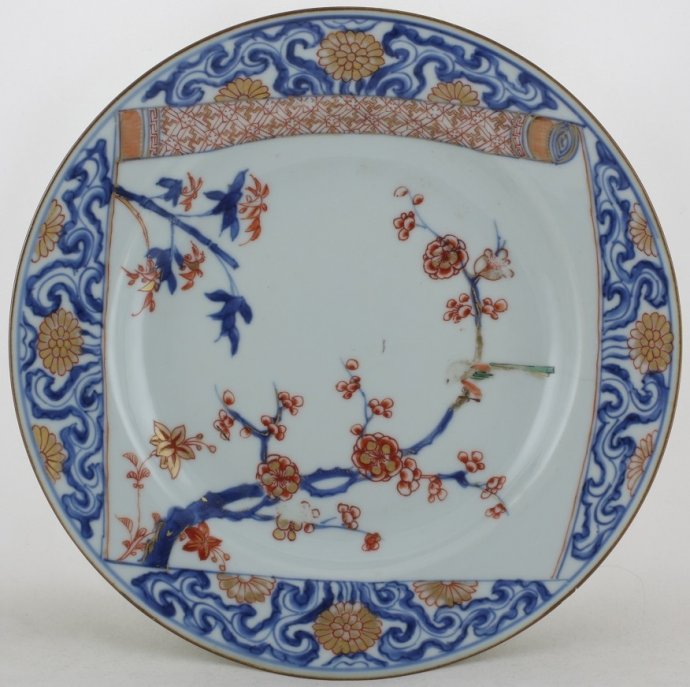 Dish on footring, flat underglaze brown-edged rim (jia mangkou). Chinese Imari, decorated in underglaze blue, overglaze iron-red, green and black enamel and gold with a half-open scroll showing a bamboo tree and a magpie perched on the branch of a prunus tree. The scroll is outlined by rather pronounced Japanese foliate and floral scrolls with chrysanthemum flowerheads. On the reverse three flowering sprays.

Chinese Imari was first introduced in the early years of the 18th century as an imitation of Japanese 'Imari'. It was based on a simpler form and was essentially an export type. The Chinese did not imitate the Japanese Imari models but copied the designs like kiku (chrysanthemum), roundels and half-roundels, fan-shaped panels, partly unrolled bamboo blinds and rather pronounced foliate and floral scrolls. The Japanese Imari colour combination was also copied, the Chinese Imari colour palette consisted of iron-red enamel and gold in combination with underglaze blue. Sometimes other colours, and even certain enamels of the famille verte such as green and black, were sparingly introduced and used in a subtle way. Chinese Imari remained popular into the 1720 after which it became overshadowed by opaque enamels. (Howard & Ayers 1978, vol. 1, p.137), (Jörg & Van Campen 1997, p.199), (Sargent 2012, pp.183-188)

On this Chinese Imari dish the half-open scroll and the pronounced foliate and floral scrolls are clearly Japanese design elements copied by the Chinese who in this way tried to appeal to their newly re-established European market. Similar dishes were collected by August the Strong, elector of Saxony and King of Poland, and were also copied by the Meissen porcelain factory around 1760. (Sargent 2012, p.188)

All known published versions of this design show one magpie perched on the branch of a prunus with bamboo. For a version decorated with two phoenixes and chrysanthemum, please see:

Condition: A frit, a chip and a hairline to the rim. 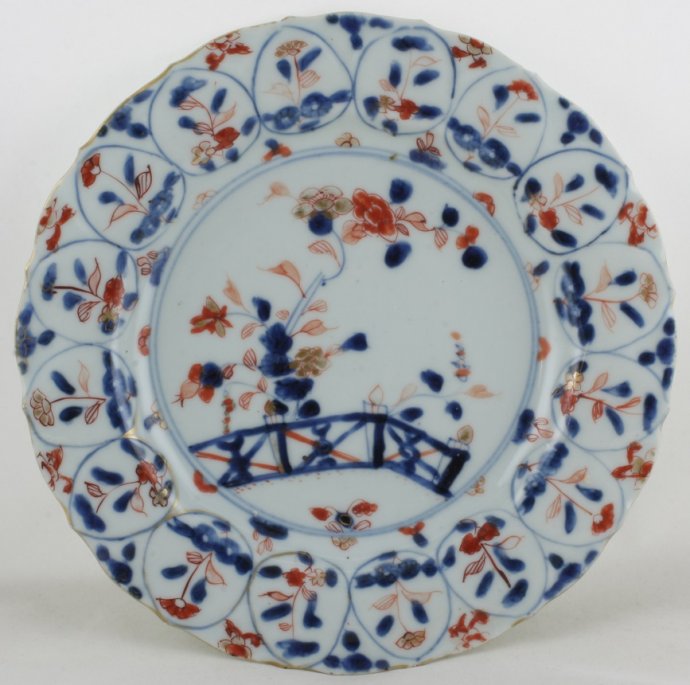 Dish on footring, moulded, egg-shaped, panels in low relief on the rim. Chinese Imari, decorated in underglaze blue, overglaze iron-red and gold with various flowers and a flowering chrysanthemum tree growing from behind a fence. On the sides sixteen panels, each separated by a flower and filled with a flowering chrysanthemum. On the reverse two flower sprays.

The shape, size and design on these Chinese Imari decorated dishes have derived from earlier (Kangxi) examples decorated in 'Red & Gold' / 'Rouge-de-fer' with iron-red, black enamel and gold on the glaze. 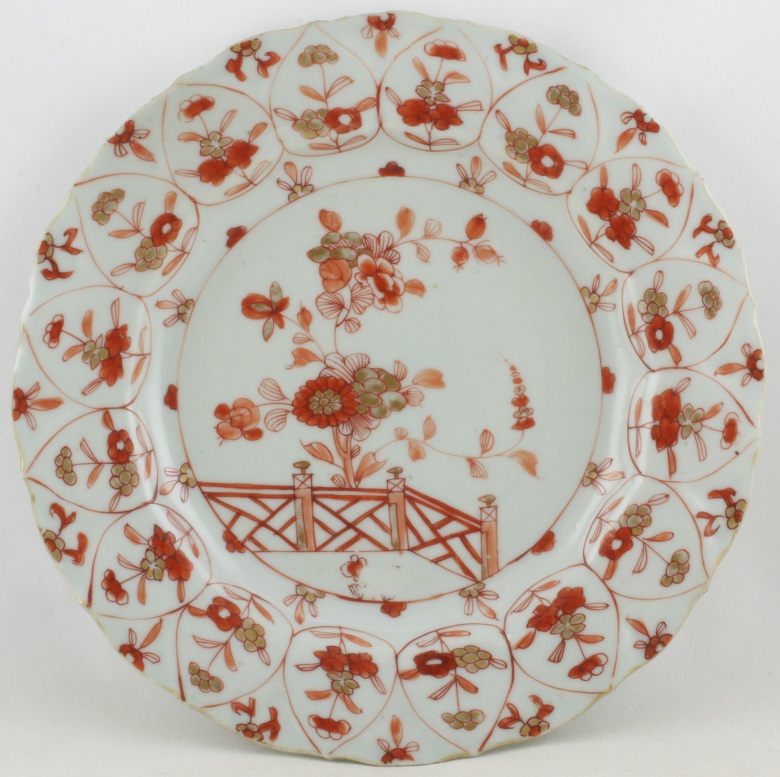 Sold object 2012213, an identically, in red and gold / rouge de fer, decorated dish, (this dish is not included in this sale/offer).

Condition: Fleabites to the rim and footring and a chip to the reverse rim. 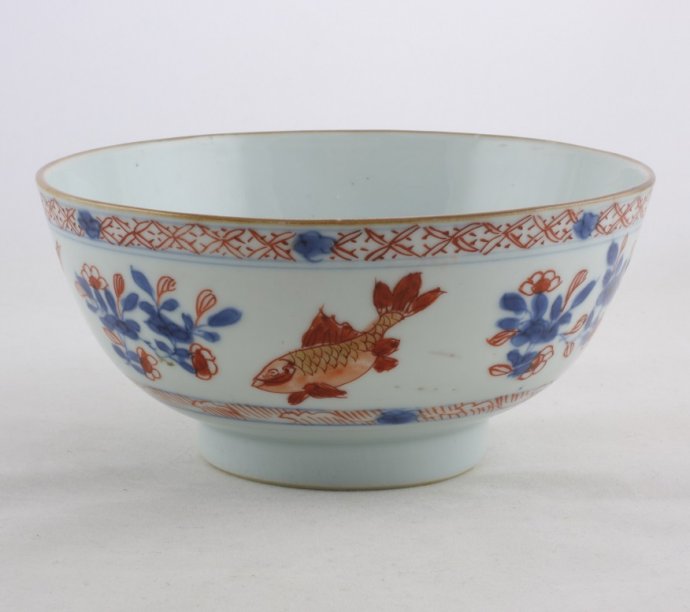 Bowl on footring, straight sides and an underglaze brown-edged rim (jia mangkou). Chinese Imari, decorated in underglaze blue, overglaze iron-red and gold with fish alternating with flowering peony sprays above a foaming waves pattern border. Round the rim a trellis pattern border. On the bottom a single fish.

Condition: A firing flaw and a hairline to the rim.

Many flowering plants all have their own symbolism; depicted together they also symbolise nature's wealth, and hence riches. (Jörg 2011/2, p.36)

Condition: Some glaze rough spots to the edges. 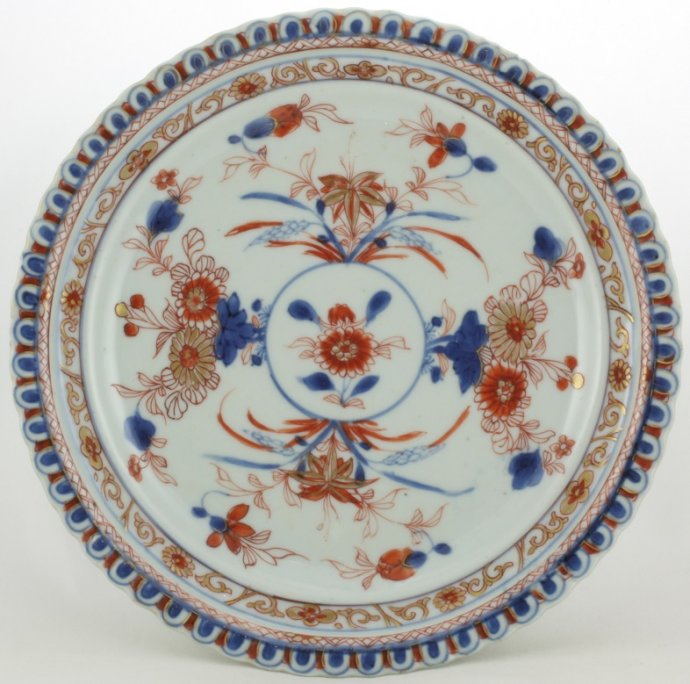 Dish on footring, the moulded rim with a scalloped edge. Chinese Imari, decorated in underglaze blue, iron-red and gold. In the centre a medallion with a flower spray. The medallion is surrounded by four groups of flowering plants and encircled by a double border, one with floral scrolls and flowerheads. the other with a crossed lines pattern. Each of the small modelled lobes of the rim has a stylised lotus-petal motif. On the reverse two flower sprays.

An identical bowl and dish, probably used in Europe for serving soup. are in the Wallenstein collection. (Suchomel 2015, p.377)

For this indentically shaped and decorated bowl and dish please see:

For a dish decorated with famille verte enamels and with a similarly scalloped rim and edge, please see:

Condition: Firing flaws to the base and reverse rim, glaze rough spots to the edge and footring and a shallow chip to the reverse rim. 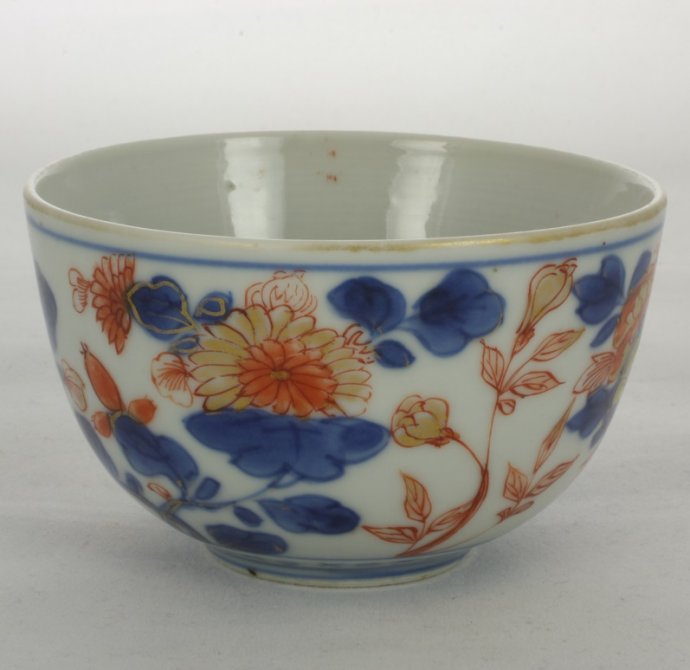 Small bowl on footring, straight rim. Imari, decorated in underglaze blue and overglaze iron-red and gold with flowering chrysanthemum and peony plants. Round the footing a marubatsu pattern (modern Japanese for 'naughts and crosses' or 'Os and Xs'). On the bottom a single flower head. 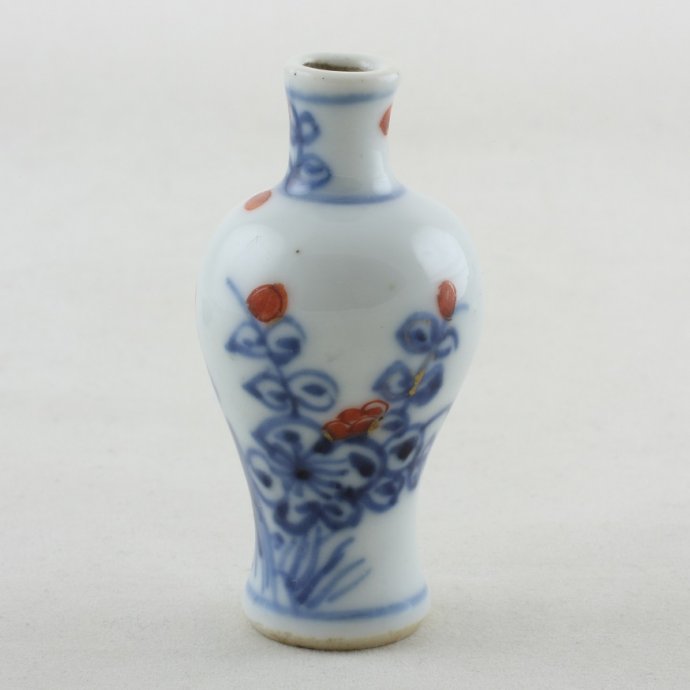 Miniature "doll's house" vase on a conical partially glazed in the center base. Chinese Imari, decorated in underglaze blue, overglaze iron-red and gold with grasses and a flowering plant. On the neck two flower sprays.

Condition: A firing flaw an two fleabites to the inner foot.