In the period 1620-50 the Chinese Imperial court reduced its orders for porcelain and the factories had to find new clients. The Dutch East India Company, (Vereenigde Oost-Indische Compagnie, VOC), was an important customer for export wares. The Company now had a trading settlement on Formosa (Taiwan) from where porcelain had been ordered in China from 1634. Besides dishes and plates made in traditional Kraak styles, pieces that were made after European models, such as candlesticks, salts or beer mugs were also delivered. Chinese shapes were very diverse, too, and included bowls, covered jars, bottles, teapots or wine ewers. A new shape was the ‘rolwagen’, a tall, slender cylindrical vase. Transitional porcelain is relatively thick, well potted, and beautifully finished with a smooth, clear glaze. The decorations in underglaze cobalt blue frequently show a continuous figurative scene in a landscape. Porcelain painters often used woodcut illustrations from Chinese books as sources for their decorations. A special feature on export wares for the VOC is the ‘tulip’ motif, probably derived from Dutch tiles. As with Kraak porcelain, the shapes and decorations of Transitional porcelain were frequently copied by Delft potters.

Ewer on footring, tall narrow curved spout joined by an S-shaped strut to the neck. Curved C-shaped handle and a splayed foot. Mounted with 19th-century Dutch silver lid (marked). Decorated in underglaze blue with a landscape with bamboo, rocks and a fence, in the middle a scholar who is holding a fan in his right hand. To his left a servant carrying a 'Qin or Gu Qin' (a musical string instrument). On the shoulder a flower scroll border and on the neck two vertical Dutch tulips with symmetrically placed leaves. Around the foot stylised lotus-petals. On the handle scattered cloud motifs. The silver marks: the sword mark was used (1814-1905) as the standard mark on articles too small for full hallmarking. What the makers mark 'I 64' stands for is unknown to me.

In ancient China, one of the 'ideal' Confucian life styles was the leisure gathering with friends with common interests. They could be music, poetry, philosophy or calligraphy. It was regarded as being noble and spiritual, besides being enjoyable The motif of a scholar who has retreated into nature for a picnic, to study scrolls, or for a spell of contemplation with his servants and/or colleagues is common for this period. (Jörg 2002/2, p.66). This particular motif is called “Carrying a qin to visit a friend” (I am indebted to Mr. S.Fan for this information)

Characteristic of this kind of export Transitional porcelain is the heavy potted body, the smooth glaze, the all-over figural decoration, and the 'tulip' motif on the neck. Besides bowls and dishes made in traditional kraak style, new shapes, decorations and combinations of traditional motifs emerged and the wares made in this period are quite extraordinary in their creativeness, freedom and variety. (Jörg 1984, p.14) & (Jörg 2011/1, p.123)

Ewers such as these  were made especially for the VOC (Dutch East India Company, 1602–1799) as well as for  Dutch private traders. During the period of this  ewer (1630-1645) the VOC ordered Chinese porcelain through the Company's factory on Formosa (Taiwan). This shape had already been part of the Chinese assortment for a very long time, dating back to the 14th century. The high foot and the curved spout connected to the neck indicate that this shape was originally based on an Islamic model. (Jörg 2011/1, pp.170-171, cat. 53).

For three examples of these early ewers, please see:

The ewers  were supplied without lids. Sometimes a mount was attached in the Netherlands, usually soon after arrival.

The provenance of this ewer is quite interesting. The current owner has told me that her great grandparents owned an apothecary in Leeuwarden, named the “Vergulde Cath” (literally: “gilded cat”). Records show that this name was already in use for this old townhouse from as early as 1654. The old commemorative stone on the façade, probably dating from around the same period, appropriately shows a gilded cat. 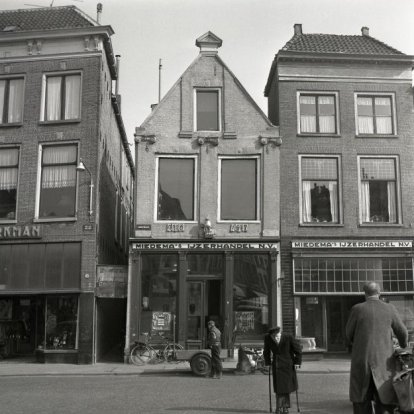 A note was found amongst the belongings of the owner’s great grandparents, indicating that this ewer was a gift from Mr. and Mrs. Zeller. A sister of her grandmother also owned a pair of ballet shoes of Grietje Zeller, another indication of the long lasting friendship between the two families. Margaretha Geertruida (Grietje) Zelle (1876-1917) grew up in Leeuwarden until her parents divorced in 1889. Later on she became better known as the famous Dutch dancer/spy Mata Hari.

Mata Hari, byname of Margaretha Geertruida (Grietje)  MacLeod, née Zelle (born August 7, 1876, Leeuwarden, The Netherlands - died October 15, 1917, Vincennes, near Paris, France), was a dancer and courtesan whose name has become a synonym for the seductive female spy. She was shot by the French on charges of spying for Germany during World War I. The nature and extent of her espionage activities remain uncertain, and her guilt is widely contested. 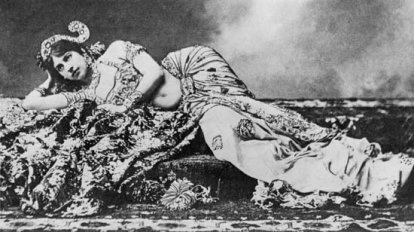 The daughter of a prosperous hatter, she attended a teachers’ college in Leiden.  In 1895 she married an officer of Scottish origin, Capt. Rudolph MacLeod, in the Dutch colonial army, and from 1897 to 1902 they lived in Java and Sumatra. The couple returned to Europe but later separated, and she began to dance professionally in Paris in 1905 under the name of Lady MacLeod. She soon called herself Mata Hari, a Malay expression for the sun (literally, “eye of the day”). She and MacLeod divorced in 1906. Tall, extremely attractive, superficially acquainted with East Indian dances, and willing to appear virtually nude in public, Mata Hari was an instant success in Paris and other large cities. Throughout her life she had numerous lovers, many of them military officers.

The facts regarding her espionage activities remain obscure. According to one account, in the spring of 1916, while she was living in The Hague, a German consul is said to have offered to pay her for whatever information she could obtain on her next trip to France. After her arrest by the French, she acknowledged only that she had given some outdated information to a German intelligence officer.

According to statements that Mata Hari supposedly made, she had agreed to act as a French spy in German-occupied Belgium and did not bother to tell French intelligence of her prior arrangement with the Germans. She had intended to secure for the Allies the assistance of Ernest Augustus, duke of Brunswick-Lüneburg in Germany and heir to the dukedom of Cumberland in the British peerage.

The German government publicly exculpated her in 1930, and the French dossier documenting her activities reportedly indicated her innocence. Viewed by only a few people, the dossier was scheduled for public release in 2017.

Condition: A frit to the underside of the tip of the spout. A firing tension hairline to the S-shaped strut. Some frits and fleabites to the mouthrim and a re-stuck handle.