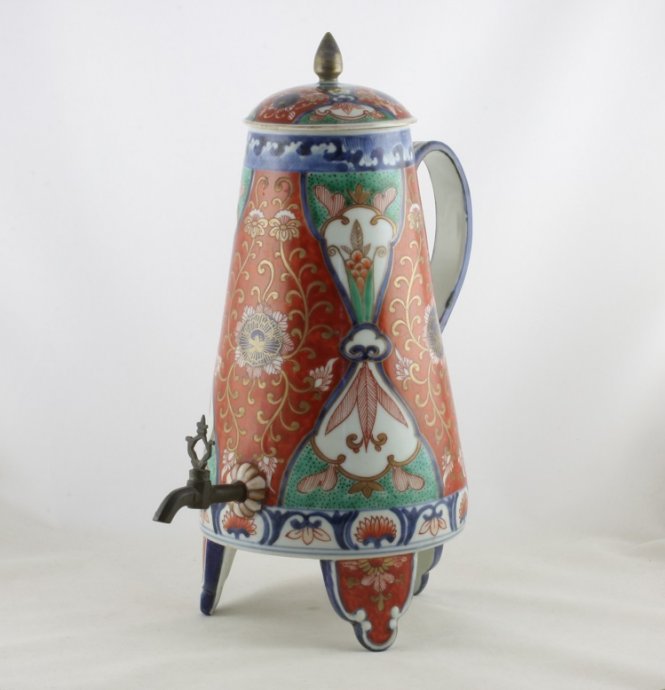 Coffee pot of conical shape on three flat modelled feet. Curved, flat pireced handle, domed cover with pointed knob and loop ring (intended for a chain between the top of the handle and the loop ring on the cover). The hole for the mounted Dutch brass tap in the lower part is surrounded by a kiku-flower moddelled in low relief. Kenjo-Imari, decorated in  underglaze blue, iron-red, green and gold. Six shaped panels outlined in underglaze blue and filled with foled leaves or a stylised, symmetrical flowering plant. In between on an iron-red ground a stylised flower head in underglaze blue and stylised leaves and flowers in gold. Round the foot a border with flower heads and scrolls and round the rim a border with waves and clouds. On the handle and feet stylised scrolls with leaves and flowers. The cover is decorated en suite.

As was the case with tea, it was not until the end of the 17th century that drinking coffee became popular in Europe. each town had his own coffee house, where everyone - which in fact meant mainly men - could enjoy drinking a cup of coffee. The Dutch East India Company, (Vereenigde Oost-Indische Compagnie, VOC), started off mainly importing coffee from Yemen, experimenting only later with plantations of their own in Java.

However, drinking coffee had for centuries already been a common practice in the Middle East. European coffee pots were therefore often modelled after Islamic copper examples. Two types of coffee pots were most frequently commissioned in Asian porcelain: conical and belly-shaped. The conical shaped pot originally came from Japan. After brewed coffee was poured into this luxurious porcelain pot, it was held warm on a stand and subsequently served through a metal tap which had later been added to the pot after it had been imported to the Netherlands. At the bottom of the pot the coffee grounds were collected. Coffee pots from China, where both types were made, don't feature a tap but a spout. (The World at Home, exhibition Groninger Museum 17 june 2017 - 31 march 2019)

Coffee pots, usually three-legged, are common in blue-and-white and in enamelled Imari. usually there is one hole left for a tap to be fitted in Europe, occasionally there are three. (Ayers, Impey & Mallet 1990, p.213)

Condition: A chip to the rim and restored cover and feet.