c.1730, over-decorated in the Netherlands, Amsterdams Bont, c.1734 or later to commemorate the marriage in 1734 of Prince William IV of Orange-Nassau and Princess Anne, Princess Royal of England. Her diamond necklace was a wedding present from her husband.

Bowl on footring with steeply rounded sides and a straight underglaze brown-edged rim (jia mangkou). Carved anhua (secret) floral decoration. Decorated in underglaze blue with zig-zag lines pattern borders round the bottom and rim. On the base a single flower spray in a double concentric band. Over-decorated in iron-red, black, gold and other overglaze enamels, in the Netherlands, Amsterdams Bont, c.1743 with three fruiting orange trees on the middle tree a banner with the Dutch word vreede (peace), this middle tree is flanked by two head and shoulder portraits of William IV, Prince of Orange-Nassau (1 September 1711 – 22 October 1751), born Willem Karel Hendrik Friso and Anne of Hanover Princess Royal, and Princess of Orange. Prince William is wearing the badge and blue sash of the Order of the Garter to which he had been nominated on 12th June 1733, and a wig whose long flowing locks conceal his crooked back. Princess Anne is wearing the diamond necklace that was her wedding present. On the bottom four groups of flowering peonies. The central representation is surrounded by an x-pattern border and four single flower sprays alternating with small foliage on the inner wall. Round the inner rim an ornamental border.

Since the establishment of the United Provinces in 1579 powerful members of the Orange-Nassau family had governed as Stadholders in the various provinces. In the 17th century their status had been raised by two marriages into the English royal family; in 1641, William II, (1626-1650), son of Prince Frederick Henry, (1584-1647), married Mary Stuart, daughter of Charles I; in 1677, their son, William III, (1650-1702), married Mary Stuart, (1662-1695), daughter of James, Duke of York, Later King James II. In 1689 William III and Mary succeeded to the throne of England. They had no children and after William's death the title of Prince of Orange-Nassau passed to Johan Willem Friso, (1687-1711), Stadholder of the northern provinces of Friesland and Groningen. This was inherited by his son Willem Carel Hendrik Friso, Prince William IV of Orange-Nassau, (1711-1751), an intelligent and courageous man whose ambition was to gain the position of Stadholder over all Seven Provinces. In 1734 he married Princess Anne, the Princess Royal, (1709-1759), daughter of George II, Hanoverian King of England, an event commemorated on delftware and Chinese porcelain. Although this is the first time that Dutch decorators had used Chinese porcelain to commemorate members of the House of Orange, it was part of a continuing tradition dating back to William the Silent (1533-1584) in which Orange-Nassau coats of arms and portraits were impressed or painted on German stoneware and delftware both in the Dutch Republic and England. (Espir 2005, pp.161-162)

Willem IV was the first hereditary 'stadhouder' of the Netherlands. On 14th March 1734 Prince William IV of Orange-Nassau married Princess Anne, the Royal Princess and Princess of Orange, eldest daughter of King George II of Great Britain and Caroline of Ansbach in the French Chapel at St. James's Palace attended by the royal family and four thousand guests. William and Anne had five children. (Espir 2005, p.163)

The source of the portrait of Prince William was perhaps a painting in 1733 by Jacob Schalken (1683-1733) of William in noble profile facing left wearing the sash and badge of the Order of the Garter and holding a heavy staff of office in his right hand. But a similar portrait was painted by Philips van Dyk in 1734 which was copied in mezzotint in 1735 by J. Faber and engraved by Ph. Endlig. As for Princess Anne, in 1734, Philip Mercier painted two portraits of her in a low cut heavily bejewelled dress, probably her wedding dress, with jewels in her hair. On one she is in profile wearing the diamond necklace, copied in mezzotint by J. Faber, and on the other she is turning to the front, but without the necklace, copied by an unknown engraver. The half-turned image with the necklace appears to be a combination of the two portraits but may derive from an as yet unidentified painting. (Espir 2005, p.164) 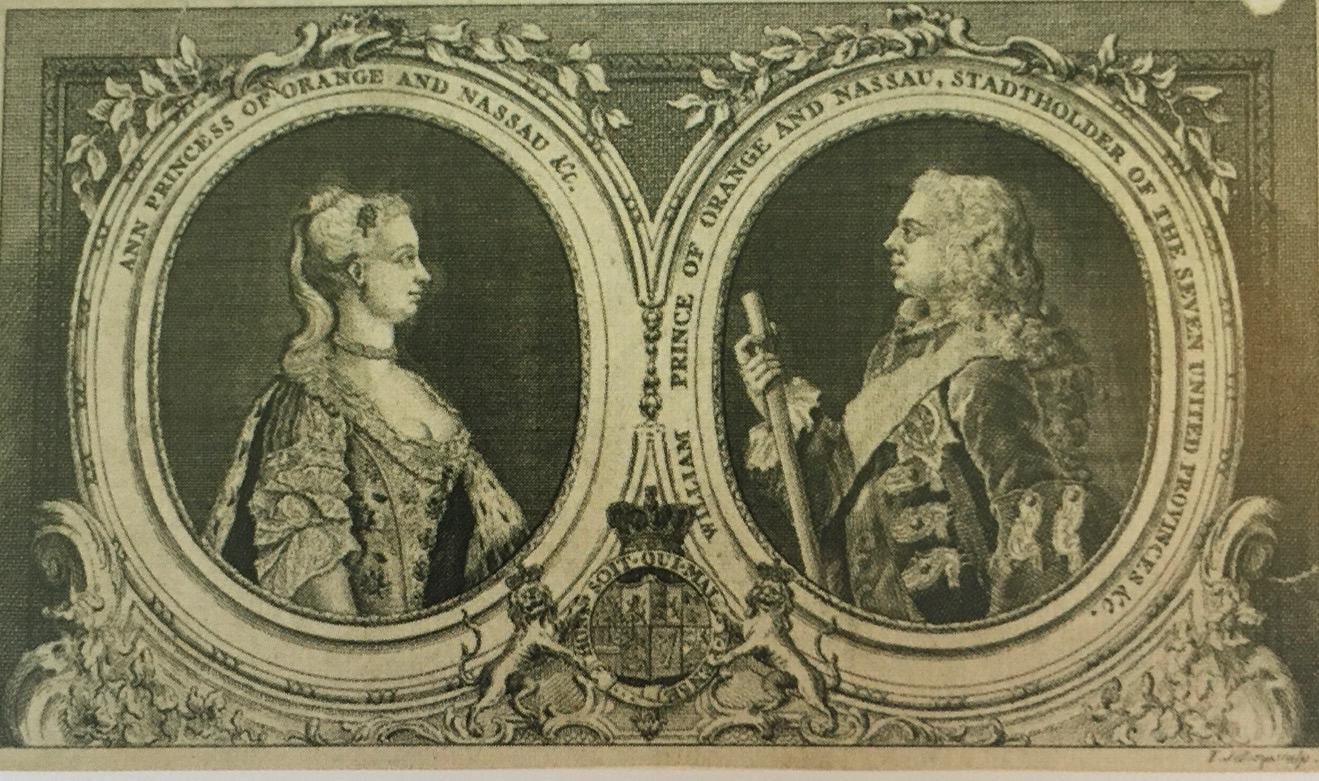 For an identically, shaped, sized and over-decorated in the Netherlands, Amsterdams Bont, bowl, please see:

Condition: A fring flaw and shallow chip to the footring and two hairlines to the rim.