According to Rinaldi this dish can be classified as a Border VII.2 dish. Here the large panels on the border are no longer filled with floral sprays or insects, while the peach has begun its transformation into what is known as the sunflower motif. Auspicious symbols replace floral sprays and insects, most of them concerned with longevity, as if to ward off the dangers of wars and famines which swept over China at that time. These symbols are usually Daoist or the Eight treasures. Buddhist symbols are much rarer. In this group narrow panels are partly filled with diaper motifs. In the centre Medallion the ducks in a pond and the hanging basket are still very common. In this group a new motif appears: a bird on a rock near water and large flowers, usually peonies. The scheme of the underside repeats that of the front. Large ogival or round panels contain fungus and dots; narrow sections contain stylised lingzhi motifs. In this group narrow panels are partly filled with diaper motifs while there are a few dishes which do not have a diaper border around the central medallion. (Rinaldi 1989, pp.100-105)

A design of a wild duck at a lotus pond signifies blessings for a fruitful marriage, since a marriage proposal was made by a man sending a duck to the woman's family as a present. Acceptance of the duck meant acceptance of the proposal. The lotus, shown in different stages of growth, symbolizes purity and abundant offspring by recalling the common phrase "from the lotus comes noble offspring". (Sjostrand & Lok Lok 2007, p.288, Serial No. 5095

For similarly decorated dishes with the ducks-in-a-pond motif, please see:

The dish is fitted in a custom-made brass fame that is engraved: 'H.W. Kardolus Delft'. H.W. Kardolus had an art dealing, framing and engraving business in the city of Delft where he worked from 1920 to 1950. This indicates that the brass frame was probably fitted to the dish somewhere in first half of the 20th century. 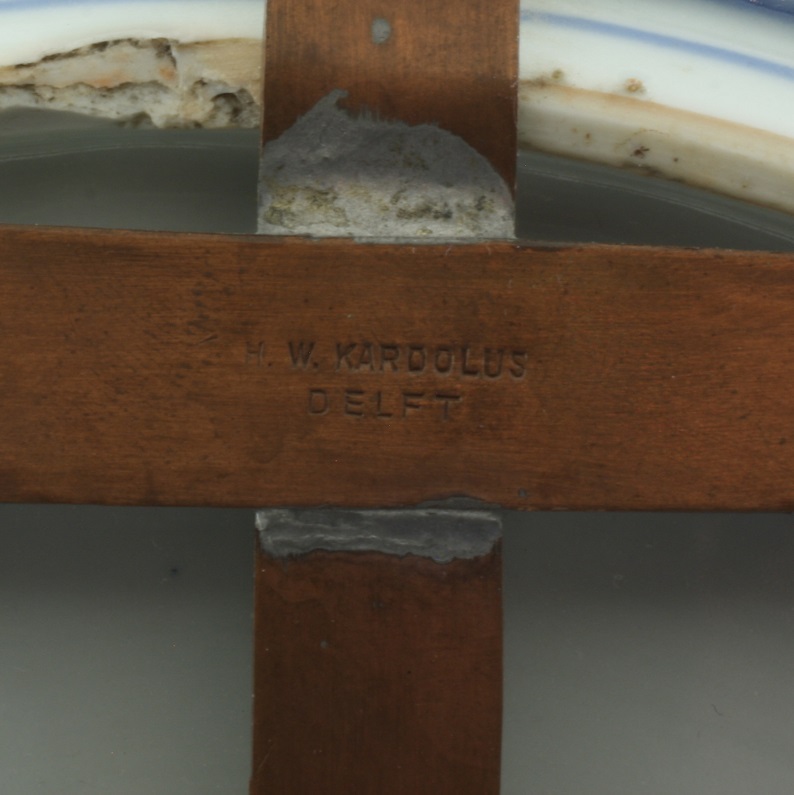 Condition: Three firing flaws, caused by the firing process, to the reverse, some shallow glaze rough spots to the rim and a shallow chip to the inner footring.