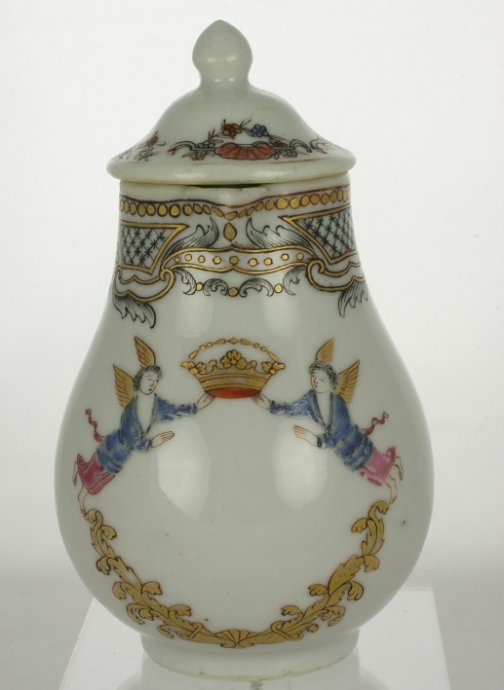 Milk jug on footring, pear shaped body with handle, small triangular spout at the rim. The handle is placed opposite the spout. The cover is not matching but dates from the same period. Polychrome decorated in overglaze blue and pink enamel, iron-red, black and gold with a large (totally faded) pseudo Armorial "initials" design (only partial visible in "ghost form"), above a coronet held by two flying, clothed angels. On the rim a band of "Laub- und Bandelwerk" or foliage and scrollwork.

These angelic figures represent marriage and were particularly popular in Dutch Heraldry at that time, being typical for the Dutch market of Armorial porcelain.

In 1722 Père d'Entrecolles reported that the Chinese were experimenting with painting in black, so far unsuccessfully. Black or schwarzlot, decoration, was also then just being developed in Europe, and in fact the German Hausmaler was putting it primarily on Chinese imported in the white, rather than on wares from the newly established Meissen factory. It must have been these hybrids that were sent back to Canton for imitation at the time of Père d'Entrecolle's letter, but the perfection of the technique and its translation into commercial export porcelain came only later, under the direct influence of the du Paquier period (1719-1744). Unique to the du Paquier factory was the Laub- und Bandelwerk border, based on two series of engravings by Paul Decker (d.1713). Continually modified and varied its essential elements were strapwork, palmettes, trelliswork cartouches, and foliate scrolls combined into a rhythmical pattern of baroque formality. Other China trade versions of the Laub- und Bandelwerk border, such as the more usual one with the addition of peacock and with panels of quilting rather than trellis- or scale work are farther removed from their Viennese factory prototypes, and are perhaps derived from Hausmaler variants. (Corbeiller 1974, pp.68-69 )

Monograms and ciphers are mainly personal as opposed to coats of arms that beside by individuals can also be borne by whole families and communities. Pseudo-armorials are those emblems and signs which only resemble a coat of arm by using heraldic components such as a shield shape and/or banners, spears, flying angels etc. that surround the monogram or cipher. Chinese export porcelain decorated with three monogrammed ovals is rare. (Kroes 2007, p.56)