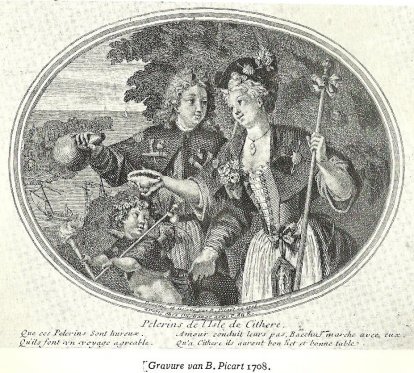 The 'Départ des pèlerins pour l'île de Cythère', or 'The Pilgrims of the Isle of Cythera ' design is directly copied from an engraving published in 1708 by Bernard Picart (1673-1733). Sotheby's New York state that the print by Picart may have been based on a popular ballet or opera and was the later inspiration for 'L'Embarquement pour Cythère', the acclaimed painting of 1717 by Jean-Antoine Watteau (1684-1721) of which slightly later engravings also were made and possibly used as sources for this popular decoration. (New York 2000, p. 112)

The original engraving by Picart has the following brief poem:

(How fortunate these pilgrims

Who make a happy journey

With love their guide, Bacchus at their side

To Venus' isle, and there enjoy her fare.)

Cythera is a Greek island, renowned in classical antiquity for its Venus cult. Amor shows the couple the way to the boat that will bring them to the island of love. The first scholar who identified the Picart engraving as the source for this design was De Vries who illustrated the print in 1923; others have since published it as well. Several varieties of this scene with different borders and colour schemes (polychrome and encre de Chine) are known on tea wares as well as on plates and dishes. The same print is copied on Meissen porcelain of c.1730-1735 and it was possibly because of the popularity of this that orders were sent to ChinaSargent states Picart made a series of 60 prints on mythological subjects, which were printed in Amsterdam in 1733. (Vries 1923, p.43), (Goldsmith Phillips 1956, p.137), (Howard & Ayers 1978, vol. 2, pp.362-363), (Sargent 2012, p.302)