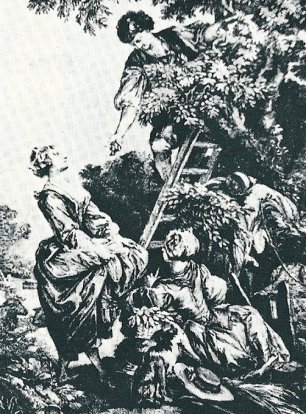 Groeneweg states that in the collection of the Victoria & Albert Museum in London the same more basic design of 'The Cherry Picker' - as on this bowl - is already found on a Dutch Delftware spittoon, dated on the rim "1747" and marked "MVP". Since this was only a year after Nicolas Ponce was born, his engraving couldn’t have been the inspiration for this more basic design of 'The Cherry Picker'. Groeneweg proposes that only the later Dutch East India Company, (Vereenigde Oost-Indische Compagnie, VOC) orders from 1778/79 of the The Cherry Picker can be connected with the engraving by Ponce. (Jörg 1978 p.162/annex 11, p.315), (Groeneweg & Braat 1988, pp.18-19), (V&A inv. C.23371910)

Lunsingh Scheurleer states that dishes decorated with 'The Cherry Picker' design belonged to the few porcelain that was ordered directly by the Dutch East India Company, (Vereenigde Oost-Indische Compagnie, VOC). In VOC archieves dating from 1777 this particular design was being refferd to as Appelplukker or appel picker. (Lunsingh Scheurleer 1989, p.217)